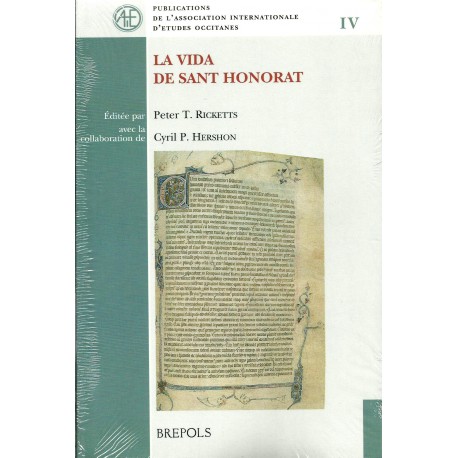 Visitors to the Isle de Lérins, just off Cannes, can see not only the island but also what today is a Cistercian abbey founded about 410 A.D. by St. Honoratus (350-429), hermit, monk and bishop of Arles. Scarcely nothing has changed physically, and the wild unforgiving landscape of the place explains the nature of many of the events described in this verse text, especially the terrifying massacre of the community after the death of Honoratus, which contains horrifying details very rare in mediaeval narratives.

Given the importance of this story, based on nine manuscripts, it is astonishing that a complete edition has not appeared before this date. The late Ingegärd Suwe Ericsson, a Swedish scholar, had undertaken an edition of the first two books, approximately the first half of the work, for her doctorate, published in 1943, in a volume which is naturally difficult to find in libraries. Thereafter, she had hoped to create a complete edition, but, sadly, her profession as a teacher, the care she gave her husband and, in later years, her own ill-health prevented her from continuing the work. In 1988, she contacted Regina af Geijerstam, emeritus professor of Spanish, University of Stockholm, to ask if she would find an editor who would finish the work, for which Suwe Ericsson had a text of the last three books. In 1989, Peter Ricketts made the journey to Östersund, where Suwe Ericsson was living, and he decided to undertake the work himself. She died in 1991. In 2000, Cyril Hershon offered his support to bring the whole project to fruition, and the edition will shortly be ready to go to press.

Not only have Association Internationale d’Etudes Occitanes and Brepols given their approval for the publication of the second half of the work, dealing with the miracles performed by Honoratus after his death, but also for the addition of the work of Ingegärd Suwe Ericsson, to give the mediaeval Occitan work in its entirety in one volume.

Ingegard Suwe Ericsson’s 1943 edition has been respected, apart from the occasional correction to the text. Her introduction considers the manuscript tradition, the language of the scribe in a full linguistic analysis, with examples taken from the first 4127 lines, and only minor elements, such as a résumé in French of this part and a list of errors found in the venerable edition by Sardou have been omitted. Thereafter, there is a complete integration of the first and second parts: the text, accompanied by footnotes, followed by notes to the text, a selective glossary, a table of proper names, and an updated bibliography.

The whole is a text which repays reading and will fill a gap in the repertoire of important mediaeval texts.

Peter T. Ricketts is Emeritus Professor of Romance Philology of the University of London, and is now Honorary Professor in the Department of French, University of Birmingham.

Cyril P. Hershon is Honorary Senior Research Fellow of the University of the West of England.