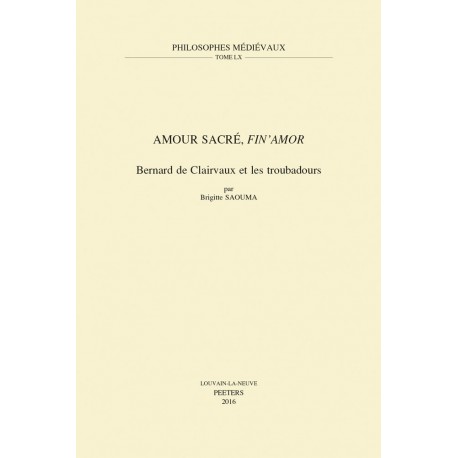 In Amour sacré, fin’amor: Bernard de Clairvaux et les troubadours, Brigitte Saouma systematically compares Bernard of Clairvaux’s examination of divine love in the sermons on the Song of Songs and other Christian writings to the secular fin'amor of the troubadours. Noting that these notions of love were elaborated at roughly the same time, in overlapping cultural milieux, she argues that both encouraged a less violent society where love is accorded as a gift, regardless of social rank, and where individuals are motivated to abandon their own will, accepting instead the will of a beloved who is (unlike earthly lords) not a strongman. In such a way, both Bernard and the troubadours “develop discourses that are opposed to feudal [social] organization, which is founded on a real inequality”. Acknowledging published sociological and historical interpretations of troubadour love lyric, Brigitte Saouma nonetheless insists that fin’amor contains a metaphysics that exceeds whatever determinism the immediate social context may exert and makes it directly comparable to the Christian metaphysics propounded by Bernard. An analogous metaphysics produces an analogous ethics, which is what allows this lyric to circumvent contemporary structures of lay power.