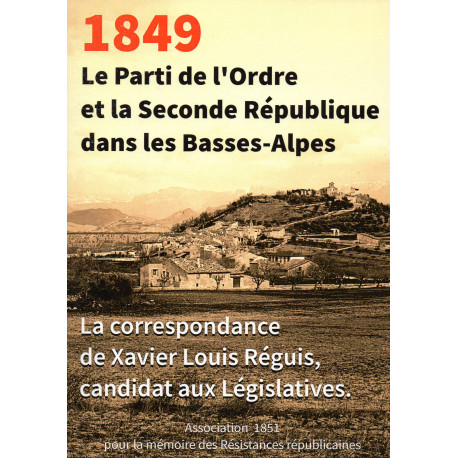 (1849, The Party of Order and the Second Republic in the Basses-Alpes).

The correspondence of Xavier Louis Réguis, candidate to the Legislative elections.

1849, Colonel Réguis for which Republic?

As in a novel, a bundle of yellowed letters is found in an old mansion that is being bought back. But here the novel turns out to be that of the intertwining of friendships, points of view and interests of a few large Bas-Alpine families, on the long term of the Second Republic which shakes, but also strengthens, their positions as masters of the land and the administration.

These letters, studied and presented by Colette Chauvin, allow us to discover a part of Bas-Alpine society that is still not well known, that of the nobles and the great notables, but also, in the background, that of a rural population that supports them... The One as the Other shaken by the economic, social and political crisis of this pivotal period. One world is leaving, another is in the making.
The 1851 association, born in the Alpes-de-Haute-Provence, brings here an important contribution to the history of the Basses-Alpes, and to History in general.

Book published by the "Association 1851 pour la mémoire des Résistances républicaine" (1851 Association for the memory of the Republican Resistance).