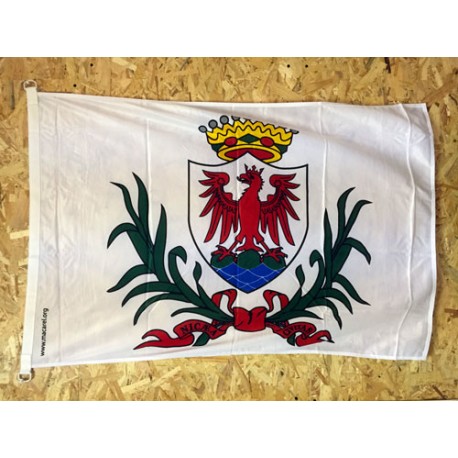 For the Nissarts, proud of the colors of their city: "Nissa la Bella!", The historic pavilion of the county of Nice.

The county of Nice (Countéa de Nissa / Niça in Occitan Nice) originally consisted of the vigueries of Nice, Val de Lantosque, Villeneuve, Puget-Théniers, and the bailiwick of Barcelonette. But over time, the boundaries of the County of Nice have changed somewhat. Today, it corresponds roughly to the district of Nice, in the department of Alpes-Maritimes, and remains a cultural region designated under the name of Pays Niçois.


The coat of arms of Nice, represented on this flag, is composed of the red eagle on the 3 hills, surmounted by the crown and surrounded by green palms under which is inscribed on a banner, Nicaea Civitas, which means in Latin: City of Nice.
The coat of arms is described as follows: "Argent eagle flight lowered crowned Gules, encroaching a mountain of three sand-waves issuing from a sea azure moving from the tip and wavy money. "

Emblem imperial, the eagle shows a dependence on Savoyard power. The counts, then the dukes of Savoy justify their power over the country of Nice by claiming their title of imperial vicar. The position of the eagle dominating three hills reinforces the county's message of domination by Savoyard power.
The association of white and red (heraldic silver and gules) is the third way to assert the Savoyard presence since the cross of Savoy is white (silver) on a red background (gules) in the coat of arms of Savoy.
The figure of three for the mountains does not seem to be an expression of a realistic but symbolic nature.

Nice flag in special mesh outdoor flag, polyester 110 g resistant to weather and UV. Dimensions 70 x 100 cm with a reinforcement band on one side and 2 plastic rings for hanging on mat.