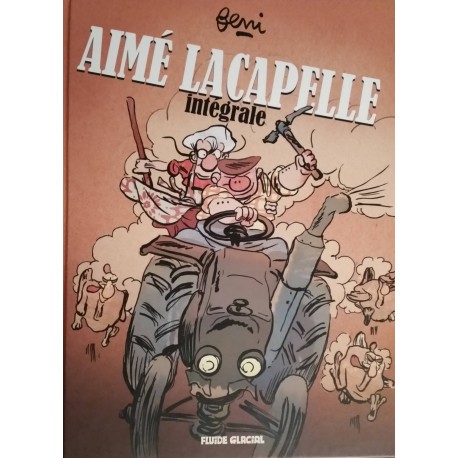 Aimé Lacapelle, The integral (4 volumes) adventures of the Tarn police farmer, by Ferri.

The series takes place in the Tarn countryside. Aimé Lacapelle is a peaceful farmer of about fifty who lives with his "méme" who prepares "round potatoes". But when the commune is in danger, Aimé proves to be a formidable agent of the BIT, the Bureau of Investigation Tarnais, to which the mayor confides his most perilous missions.


With a humorous vocation, the series Aimé Lacapelle is a parody of the deep campaign of the years 2000 where modernity and traditions collide. The incomprehension of the characters, overwhelmed by their times despite their good will, facing the urban world leads to absurd situations. Urban figures are exaggeratedly slender, facing the squat country folk, who only look at the "regional information" and the rose water series of the "Inter-ruralité" chain. The comic also comes from the use of the codes of the police series or espionage, but in a context of southern village and exclusively agricultural.

Also, one side "lived" is strongly felt: mocker but never disrespectful, Ferri (who lives near Foix - Occitania) mocks the environment from which he came. It is even more striking for someone from the French Midi-Pyrenees.