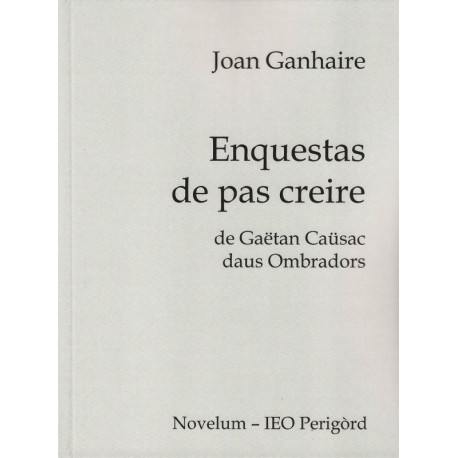 Enquestas de pas creire de Gaëtan Caüsac daus Ombradors - Joan Ganhaire. This detective story takes us on a journey through the tribulations of Gaëtan Caüsac, a brilliant retired commissioner turned private investigator who takes us on different police cases, each one as incredible as the next. Six unbelievable investigations, but he has a great team. Occitan from Limousin. IEO Perigòrd Novelum.

Count Gaëtan Cahuzac des Ombradours is not very dashing, no matter how noble and lordly he is: he is blind, he is always cold, he always needs to drink and pee, and his character, let's not talk about it! And yet his past as a brilliant police commissioner and his reconversion into a private detective give him the opportunity to solve the most incredible mysteries because, if he can hardly see, he has all his head and, thanks to Julien Vergnenègre (the narrator) and Francisco Iglesias, former crooks who have passed through his service, he will be able to carry out his investigations which are really "not to be believed": that of the horrible bat cellar, that of the penguins that one seems to meet at every street corner in Bordeaux, that of this woman whose husbands always seem to fall from a little too high, that of the rest home where people die in a strange way, that of the mute boy who came out of nowhere on a square in Clermont-Ferrand, that of the house haunted by the evil poem of a certain Rimbaud (Arthur). ..

And beware: when the fine team leaves the castle of Ombradours to go hunting, hang on, good people, you will not finish shivering... and laughing!

Joan Ganhaire (in French Jean Ganiayre) was born on May 21, 1941 in Agen, Lot et Garonne. An Occitan writer, he uses the Limousin dialect. A retired doctor, he studied in Bordeaux before moving to the Perigord countryside, where he became aware of his Occitan identity. His first collection of short stories "Lo Reirlutz" was followed by a second, "Lo Viatge Aquitan" which won the "Jaufré Rudel" Prize in 2001.