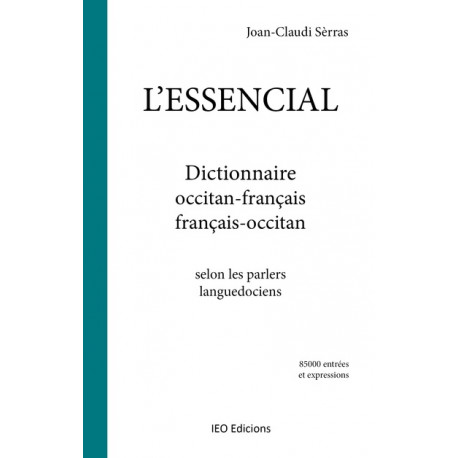 according to the Languedoc dialects.

THE reference dictionary for modern Languedoc language with more than 85,000 entries and expressions..

A high point was needed in the work started years ago, in the Tot en òc at first, an illustrated dictionary in collaboration, then in the Tot en Un, only, to Joan-Claudi Sèrras, former professor of Occitan, to offer this complete dictionary, the Essencial, which he wanted for the Languedocien.

Rich in expressions, with great lexical consistency, L’Essencial allows all possible uses for new learners as well as for speakers familiar with the language or for teachers. The proximity to orthography, which only the paper version allows, allows you to enrich your vocabulary and indulge your curiosity.

L’Essencial, the dictionary that does not fit in your pocket but will be essential for your practice of Languedoc Occitan.

Joan-Claudi SÈRRAS was born in 1944 in the Tarn. Professor of Classics and Occitan, novelist, he was responsible for IEO IDECO editions from 1987 to 1995. Collaboration in the writing of Lexic Elementari (IEO 1996) and Tot en òc (IEO, 2002).