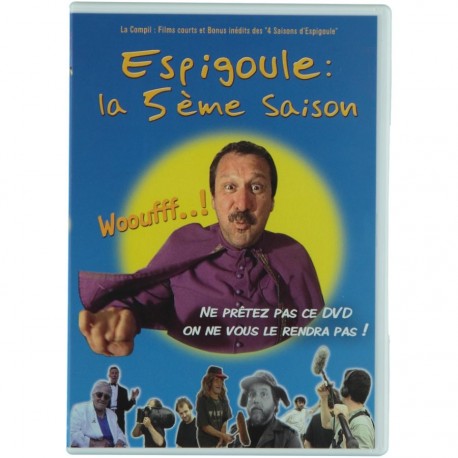 In March 1999, on French cinema screens, appear a real cinematic UFO, Les 4 saisons d'Espigoule, directed by Christian Philibert and performed by the inhabitants of his native village in Provence (Ginasservis). Between documentary and fiction, this comedy, where everything is not true but nothing is really wrong, was a critical success, several awards in international festivals and more than 100,000 spectators in theaters.

Thanks to a growing number of fans, Les 4 saisons d'Espigoule has since reached a true cult status in France.


On the occasion of the ten years of its release, here finally gathered all the short films that Christian has made in Espigoule as well as the new bonuses of the 4 seasons.


Discover in this DVD: 3 hours of short films, unpublished sequences and the making of the 4 seasons of Espigoule. "Do not lend this DVD, we will not give it back to you!"

ATTENTION : This DVD does not contain the film "les 4 saisons d'Espigoule" available here.

Christian Philibert was born in 1965 in Brignoles in the Var. It was at age 20 that he decided to become a filmmaker. He then directed several short films that will be rewarded in many festivals. Noticed by Canal +, he directed his first feature film Les 4 saisons d'Espigoule, shot in his native village, which was released on French screens in 1999.
Refusing to go into exile in Paris to pursue his career, he created in 2002 his own production company, Les Films d'Espigoule. The same year, he directed his second feature film, Travail d’Arabe, a social comedy in the shape of a modern western, released in 2003. Selected at the San Sebastian festival, prize for the best first work of fiction at the Namur festival, the film is broadcast on Canal + and on Arte.
In 2013, he produced and directed Afrik'aïoli. This burlesque African sequel of the 4 seasons of Espigoule is a true feel-good movie that tells the picaresque adventures of two Provençal people traveling to Senegal.
Passionate about history, he is also the author of numerous documentaries: Gaspard de Besse (1993), 1851, ils se levèrent pour la République (2000), Français à part entière (2001), Le complexe du santon (2005), Provence, août 1944, l’autre débarquement (2014), ’affaire Yann Piat.
Christian Philibert builds film after film in a baroque and humanist universe, imbued with both references to Provencal cinema and astonishing modernity. This original and militant work plays a leading role in the emergence of a true cinema "du Midi" (south of France).