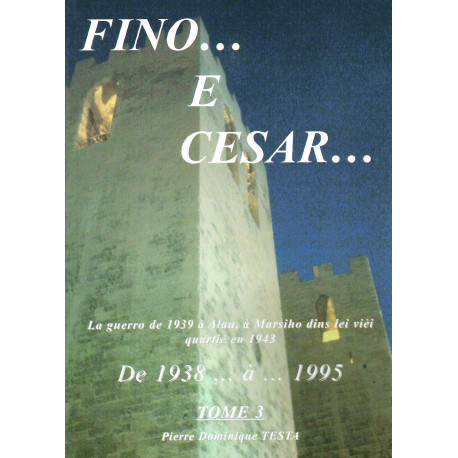 
The third volume of the novel "Fino e Cesar" begins a few days before the declaration of war in 1939 and ends with the death of our heroine Fine Falquet, quickly called Fine César according to Provençal customs, because she is the wife of César Gabruel. This long story recounts the life of the people of Marseilles in the face of the visit of Marshal Pétain in 1942, the life of the Church of Marseilles during the war, the underground under the Old Port which joins the Abbey of Saint-Victor, the end of the old Marseilles district of St Jean in January 1943, the German occupation in the village of Allauch and the great Phocaean city, the restrictions, the bombings, the battles on the front of the Maginot line, the fortresses of Briançon and Mont-Dauphin under Italian fire, the labor camps of Fréjus and Les Milles, the concentration camp of Auschwitz. ... as well as the resistance in the Etoile massif in the shelter of the Garlaban hills...

This novel "Fino e Cesar" written in three volumes, is entirely written in the language of Oc of Provence, this exquisite Provençal Occitan language which remains a regional reality but which often, alas, by lack of information is associated with a past linguistic myth. However it is nothing of it... ...

See also volume 1 and volume 2 of the series.