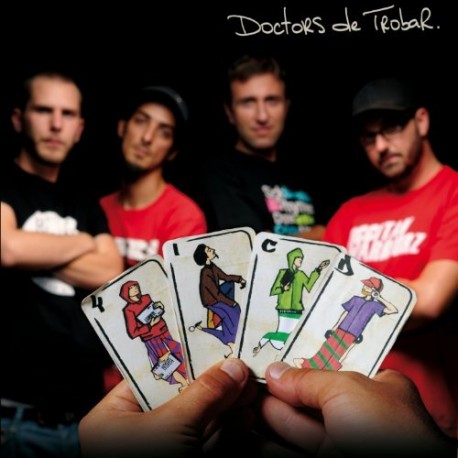 Doctors de Trobar - A resolutely hip hop CD, the art of rhyme and rhythm, or how the Occitan language, marked by a long lyric tradition, strikes the beat and the flows of a sharp rap.

A project resolutely hip hop with Drac, Chab, Inti (members of Mauresca) and Yellow. The art of rhyme and rhythm, between "Sicard and Biggie", or how the Occitan language, marked by a long lyric tradition, percutes the beat and the flows of a sharp rap. Drawing from the sources of hip hop and confronting their universes and their musical experiences, these occitans bambaataas vie with the mic to defend their title of doctor of trobar.

Eyes and mouth always wide open, the lyrics flow of a nonchalant flow, like who enjoys sipping an anisette on the edge of the Mediterranean.

Pacific region? Not always, and especially not when it tchatche auto-thune and power, to those who do not share them. The doctors of the light trobar are on the side of the popular, of the one who takes his time to live and land between two galleys.

Warm, coppery, tanned, groovy, the deep sound is transformed when it comes to minimal trap and electro sheet. The Doctors of Trobar is not the Middle Ages, it is the alterno instructor and the punchline coco, the committed rap of the one who fights, the rap released from the one who fights, is tones Reggaeton not to lose its Latinity, it is a common transport in the underground of our societies, between Montpeul ', Paname, Frisco and Tijuana.

More South America than South of France, but francophones with accent, multiple influences replace identities when flags are kept only the handle, we talk about everything and then nothing, we awaken the senses and work the form , The head full of projects and the feet in the water.

Yellow, Chab, Drac and Inti, each of them has four paths, each of which brings a flavor of rap game, to taster, without testing them too much, by DJ Kayalik (Massilia Sound System). Their trobar goes there lute, rough and supple, explosive and festive, without ever refuse the melodious chords of a quiet melancholy. Chila!


After the release of the first opus of Doctors de Trobar in vinyl the year before, Ox'Ivent reissued the album in CD format. Indeed, concerts, artistic projects with artists like "Lou Seriol" and "Moussu T e lei Jovents" have pushed them to want to distribute their music to the greatest number.

A CD for your car, for your living room, and for your "papet" or your "mamette" !