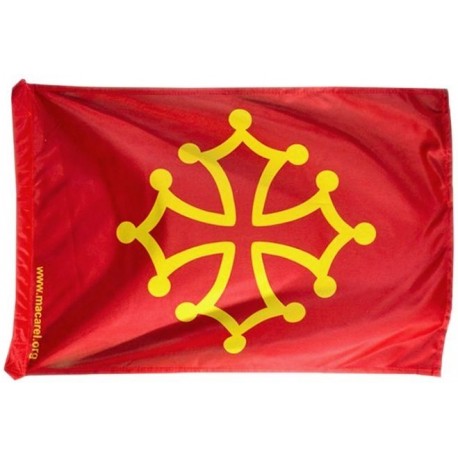 The Occitan cross (crotz occitana) - also cross of Occitania, cross of Languedoc, cross of Forcalquier and Toulouse cross — is the symbol of Occitania. Now, it's used to represent the Occitan language and culture, or more generally as a regional emblem.

A yellow Occitan cross on a blood-red background makes up the flag of Occitania. It can also be found in the emblems of Midi-Pyrénées, Languedoc-Roussillon and Hautes-Alpes.

Note: there is also the Occitan cross outside Occitania, such as Pisa, Italy.

In the Occitan valleys of Italy, under the law 482-99 for linguistic minorities, many municipalities hold a ceremony laying around Occitan flag on official buildings. A text is read in Occitan and Italian, explaining the reasons for the ceremony and the flag is hoisted to the sound of "Se Canta." The ceremony took place for the first time in France, in the village of Baratier (05), November 19, 2006.

Today, the flag is present in all Occitany. Can be seen in advertising, in a house decorated, in sport to support an Occitan team, in cemeteries and at country crossroads ... It has become a symbol of culture, language and Occitan territory .