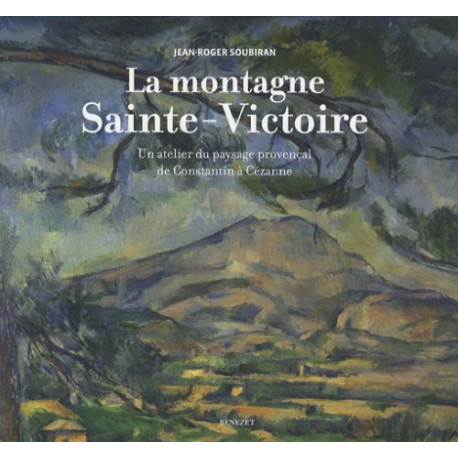 Sainte-Victoire mountain: A workshop of the Provencal landscape from Constantin to Cézanne.

The Sainte-Victoire mountain takes part in this incessant transformation of the landscape and of the gaze which took place in the 19th century. Because it intervenes in this frequentation of light, it appears as a laboratory where new formulas are set up, as a key element, if not a founder, of the Provençal landscape. Far from the sublime of the Alps, it is by its serene monumentality, its force of appearance, its brilliance, that the Sainte-Victoire conquered the Provençal painters - in particular Constantin, Granet, Loubon, Grésy, Guigou, Monticelli ... - generally loving stability. The anthology offered here illustrates the artists' takeover of the mountain and their challenge to diversify the vision. Accompanying the reader in this quest for the sacred of which the mountain is the support, the author engages in a complex dismantling of the works - both plastic and symbolic - to reveal their meaning. The alchemical reading he gives of the Cezannian approach brings another dimension to the production devoted to Sainte-Victoire.

From now on, the artists of the XXth century, engaged in the challenge of its representation, will be able to perceive it only through the more or less admitted Cézannian filter, so that painting the Sainte-Victoire will be a way of confronting each other at the same time. to the mountain and to the master who immortalized it. Also, La Montagne Sainte-Victoire, a workshop of the Provencal landscape from Constantine to Cézanne, intends to be a useful milestone in the knowledge of a motif essential to the creation of the master of Aix.

Jean-Roger Soubiran, Professor of contemporary art history at the University of Poitiers, directed the museums of Cannes (1982 to 1984) and Toulon (1984 to 1997). After dedicating himself to the Symbolism of the South - Gustav Adolf Mossa (Ediriviera 1984); Valère Bernard (Jeanne Laffitte 1988), he opened his field of research to the study of landscape and contemporary art, organizing more than fifty exhibitions and producing nearly one hundred articles.
With the publication in 1992 of the book Le Paysage provençal et l'Ecole de Marseille avant l'Impressionnisme (RMN), accompanied by a decisive exhibition at the Toulon museum, the author is one of the pioneers of landscape rehabilitation in the history of French painting in the 19th century. Having contributed to Painters of Color in Provence (RMN 1995), then to Gustave Courbet and Franche-Comté (Somogy 2000) - he is at the origin of the international colloquium History and representations of western marshes from the Middle Ages to the present day , organized in Poitiers (Somogy 2002).
He also published "L'Œuvre des Martins - The Utopia of an Eternal Provence" (Fage 2005, Musée de Digne) and "Dunes de la Pointe de Grave à l'Adour" at the end of 2006 by Le Festin en Aquitaine.