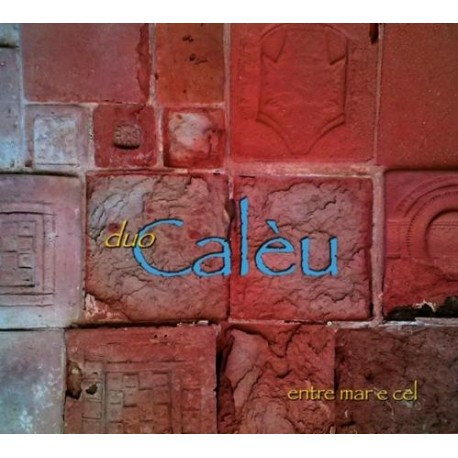 (Between sea and sky).

The duo CALÈU leaves with pleasure the beaten paths, far from noises and excesses, with hearts close, we experience to listen to them, the deep feeling that they address to us, personally, intimately, but we also listen, like a conversation Where the pleasure of listening would respond to that of singing. A fraternity. A soothing sensation of well-being ...

For this new album, the second after Tèrra de Sistre, their voices perfectly accompany the instruments - folk guitars, alto violin and violin 4/4 and an cetera (cistre corsica) - which highlight their poetic texts.

The first of the opus, Au Caminaire, is a moving poem signed by the late Danis Huguet. In beach 2, it is Marinette Mazoyer who lends her pen for the title Iscla de paradis. These two compositions alone illustrate the title chosen for this CD whose sound, mixing and mastering were made by their accomplices René Huré and the Scottish Angus Haird. Other authors have collaborated such as Simone Robert, Jean Guers, Georges Peladan, Martine Michel, and new ones like Martine Michel de Meyrannes, and ex-Occitanist Pierre Mazodier whose text closes the CD.

The duo Calèu formed in 2011 the desire to put into poetry poets of Occitan expression. Céline Klisinski and Hervé Robert share the musical composition and the choice of texts.

The duo would possess in its DNA a little of the heritage of the Troubadours, with a point of fado in the voice of Céline, lets breathe an old air in that of Hervé.

The guitars intermingle, the violins make gush forth colors, the duo Calèu sings and enchants the Languedocian poets ...