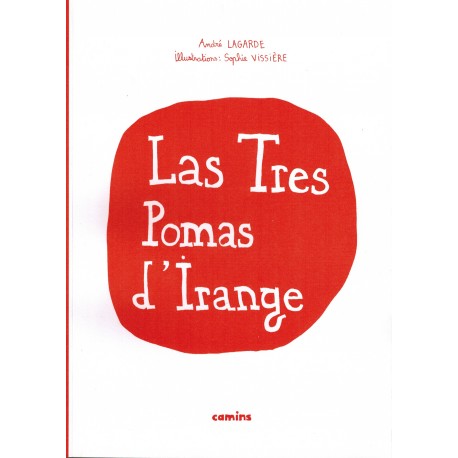 A beautiful calligraphy by Sophie Vissière, from a tale by André Lagarde, accompanied by a CD read by Serge Carles.

In the beginning was one of the first works of Sophie Vissière: a splendid little book of 48 pages, resolutely artisanal, from calligraphy to illustrations, without forgetting the binding, with bright colors black and red. Las Tres Pomas d'Irange, an Occitan tale taken from the oral tradition, was silkscreened and shot at 114 numbered copies.

Seven years later, Letras d'òc transforms this creation into an exceptional album: enlarged so that it flourishes on a larger format, printed on a sumptuous paper to honor its superb illustrations in two-color, while preserving its Handwritten English as well as a French translation at the end of the book.

A book-CD:
To facilitate the transmission, the pleasure of listening, and to do justice to the beautiful Occitan sounds, an audio recording was added to this album. A CD is attached to the book, and it is Serge Carles who puts his voice on the story of the three orange apples. Serge, by the sole talent of storyteller, is capable of keeping in full respect the whole assemblies of captivated pichons. We could only dream of a better reader!

The illustrator Sophie Vissière meets a growing and deserved success. It is that Letras d'òc, is not in their first collaboration with Sophie: already three albums and several covers! But that's not all: Sophie is also the granddaughter of another very important contributor of this publishing house, André Lagarde. An outstanding storyteller, an indefatigable teacher, Mr. Lagarde is an inescapable figure of Occitan culture, and he has often trusted Letras d'òc for the publication of his works. It was he who wrote the Occitan text of the book illustrated by his granddaughter.