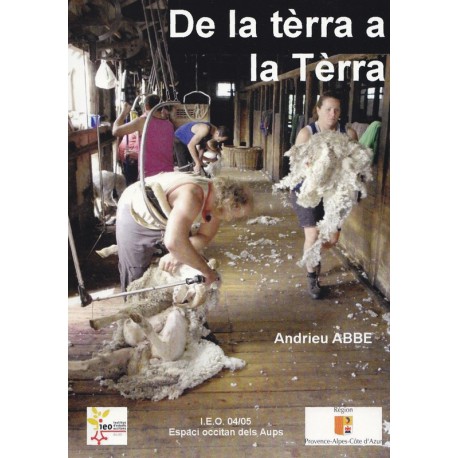 A few years ago, André ABBE published the "Cronicas provençalas de la terra". With "De la tèrra a la Tèrra", it is a continuation of these chronicles in the "Farmer Provençal" that he proposes.


With its observation columns of the peasant world, Andrieu Abbe puts the human being on a pedestal, the anonymous farmer also has his commemorative flame. "From the Tèrra to the Tèrra" proposes thus a hundred notes incisive or tender, to say a world to protect as the Occitan that serves to tell it.

A few years ago André Abbe published the book of chronicles "Cronicas provençalas de la terra". With "De la tèrra a la Tèrra", it is a sequel that he proposes to us. Thanks to his work as a journalist, he was able to travel the world. Thus he was able to relate the wonders as the demons he encountered. But this robust peasant of Roquebrune is also the man most faithful to the land, that of his ancestors whom he still cultivates, but more broadly the land of Provence, the land of Occitania, the land of the Mediterranean.


Without posture or lyricism, he took an acute but always smiling glance at the world of today's peasants, his greatness and misery in the very heart of our rich lands, which they nourished and shaped for millennia before Often becoming the outcasts of which the powerful of the new world drives without emotion the slow decline.

Carried away by triumphant modernity, our people have sacrificed with joy all their treasures accumulated for centuries, beginning with the very foundations of our thought to each one that constitute our own languages. But today the vanguards of the mad human race begin to perceive the disturbing signs of the unknown landscape where they precipitated us without return.

We find these words in one of the peasant chronicles of which Andrieu Abbe has feasted for more than twenty-five years the readers of the Farmer Farmer. He defended the hard work of the shepherds, subjected to the attacks of wolves, and occasionally to the insulting remarks of certain ecologists.

Our most distant ancestors called the saving and the return to the country after the adventure. André ABBE is one of those who have ventured to this adventure and who have traveled the world and still traverse it to tell their more sedentary fellows both wonders and demons.

André Abbe was born in 1944 in Roquebrune (83) in a family of wine-growers from Occitan. He worked on the exploitation of his father, while working as a photographer on five continents, then as a journalist for the agricultural press and finally in France 3 where he produced the program Vaquí.
From October 1983 to January 1, 2010, he published 1130 chronicles in Provencal in the weekly "l'Agriculteur Provençal" (Aix). A first selection of these chronicles was published in 1989 under the title "Cronicas provençalas de la terra".


This short collection of chronicles of the earth transpires from the humanity of its characters, that Abbe goes to paint them in the depths of the shepherds' Australia, or at the heart of our alpine pastures where the country's pastors, confronted with multiple problems.

All that concerns agriculture and its servants goes through these 135 pages of Provencal, arranged by one who speaks "lenga dau breç", a natural speaker who loves to travel to meet the other, to confront the ways of living, The ways of thinking.

He humorously comments the passage from the cork to the plastic on our bottles, delivering some old word games for children; He observes, astonished, the progression of dual activity among farmers, confronted with the difficulty of living from their work; He is worried that 5 million Provençals are taking too little interest in a forest that is their life insurance against global warming ...

And he rummages against the impossibility of becoming a peasant without going into debt at the age of thirty for the rest of his life, without being confronted with the urbanism that eats the best land, and subjected to the indifference of society feed.

Provençal of Andrieu Abbe, who is often of the Alpine Occitan, laughs of the reconstructions of the language, tempted in the dusty offices. He draws it from what he heard from the last generation who spoke it every day, and to express everything. That is why many people will be able to draw from it an alert language, which is used only if it is not used!

The preface and the presentation (in French) are by Alain BARTHELEMY-VIGOUROUX.

Language: Occitan Provençal maritime (classical writing). Note that texts have been adapted in Mistralian script by Pierre IMBERT and others in Alpine dialect by André FAURE. And a vocabulary is there to help the reader.