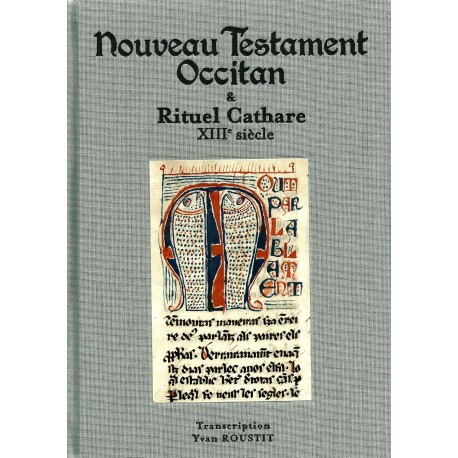 Text of a Nouveau Testament (New Testament) and a Rituel (Ritual) in Occitan language, transcribed by the Albigensian historian Yvan ROUSTIT from a manuscript of the XIIIth century.

This beautiful and voluminous book of more than 400 pages gives us the text of a New Testament and a Ritual in the Occitan language transcribed by the Albigensian historian Yvan Roustit from a 13th century manuscript currently held by the Municipal Library of Lyon. The data of the Ritual and its association with the New Testament make it possible to affirm that the manuscript was composed for Occitan religious dissidents, "good men" or "cathars".

The preface to this book was written by Jean-Louis Biget, a renowned specialist of the medieval period, and particularly of the period and history of the Cathars.

This book was awarded the Grand Prix of Occitanie on October 2, 2016, at the Salon of the Book of Gourmets of Letters, under the aegis of the Academy of Floral Games in Toulouse.

After the Albigensian war and in spite of the Inquisition, in what hidden and accomplice place, convent or castle, were the good men, Cathar priests, able to have the New Testament and the Ritual they needed to be written in the Occitan language "Consolamentum"? By what miracle did this beautiful manuscript substitute to our own day in perfect condition? Conserved in the Library of Lyon, it was photo lithographed by the Lumière brothers after centuries of forgetfulness. Here it is, transcribed and presented for the readers of today by an Occitan Albigensian historian.

Excerpts from the introduction:

"The Occitan text that we are publishing here is not a translation, but a transcription. This text makes a text of the 13th century available to today's readers without changing its content, whereas the original Is readable only after a preliminary initiation, because of his writing in Gothic letters, full of abbreviations unusual today, like letters and words whose reading is not always easy ... It took twelve years of Work which is not fierce but still sufficient to reach the goal.It must be said that a transcription of a text at this time never seems to have been completed.It demands particular attention, Attaches and lingers to each word of the text, often to each letter, to each abbreviation, to each sentence whose scope, punctuation and meaning must be restored ...
Yvan Roustit, from the introduction. "

Yvan ROUSTIT is a member of the I.E.O. Albi. He devoted 12 years of his retirement as a teacher to the transcription of a remarkable and very precious manuscript (especially for us occitans): a whole New Testament, followed by a Cathar ritual.

This manuscript of the 13th century, entirely written in Occitan, is preserved in the Municipal Library of Lyon where it culminated in 1815. It was first photolithographically reproduced by the Lumière brothers in 1880, then d 'A reprint in 1968. It was from this last that he worked to make the transcription.
The original work is written on parchment and the reproductions made in 1880 and in 1968 remained faithful to him in all respects, including in the layout. But the reading is difficult because the writing is in Gothic letters, full of abbreviations and without correct punctuation. The transcription made here, according to the standards in use in this practice, fully respects the Occitan text; But it reproduces it in letters of printing, with a modern punctuation and the development of the many abbreviations contained in the original. This required a very long work and a special rigor.
All the texts of the New Testament are transcribed on 350 pages and are accompanied by 70 pages of presentation and analysis, in French. The book also reproduces the 30 color aniconic illustrations taken from the manuscript where they accompany each of the New Testament texts and the Ritual.