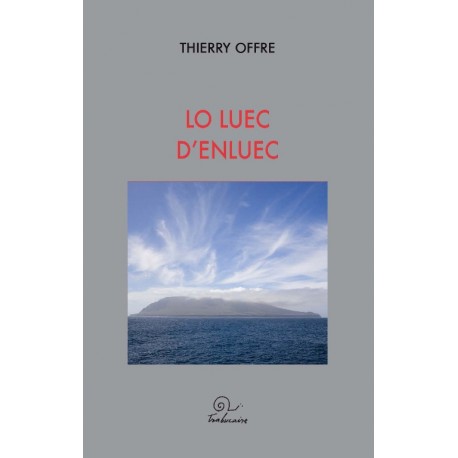 Between the Indian and Antarctic oceans, somewhere in the roaring forties, a small island is battered by winds and waves, which happens to be French. A scientific station was set up there, the author of which, a meteorologist of his trade, stayed for a winter.


He tells us life in this "place of nowhere", a paradise of birds and marine mammals. For the men who have made themselves prisoners for a few months, the dreamed utopia can degenerate into hell, for it is well known that hell is the other.


The interest of this narrative non-fiction lies also in the language chosen to say "nowhere", a paradoxically rooted language, which, no more and no less than all the others, has nothing to do in this desert of " Before the man: an Occitan hyper-Marseilles, full of orality and invention, which gives taste and flavor to the nothingness of insular life, a quai speech exiled in the immense emptiness of this world from the end of the world.

After the Midwinter festivities, everyone goes back to their routine; time slips away towards the Austral winter. Once and for all everyone falls back to their assigned tasks in the community, from the boss to the baker, the physician and the carpenter. All of them are back at work, surrounded by the luscious vegetation of the Indian Ocean, the spirit of St John’s day has soon gone. Of course there will be plenty of other festivities - some of them less remarkable - there will be one to commemorate all anniversaries, there will be also times of rest that feel like week-ends, when the winter vacationers flock with their friends by the dozens to their cabins, in Capitani, Antonelli, or Mataf. They are scattered all around the island, most often by the seaside, except for Antonelli, which was erected on a ridge like a white cigarette stub poised on the brim of an ashtray.
The sky has become cloudy, a pall of darkness has come, starless. Meanwhile, near the La Cale, the sea can be heard, raging, and the waves are swelling. You can hear the seals barking in the background, the wild animals are calling one other, they are lazily creeping about on the rocks. At night, they seem playful like children who play truant, the rogues, as Guilhem and Roi z’oizo1 put it. Gracchus was to come but he has chosen to sulk back in La Réunion, and nobody has a clue as to why. He won’t come. The ornithologist has carefully changed into clean clothes; he didn’t want to bring along to the cabin the sour smell of vomit, the smell of the albatrosses he is studying. The two know they are expected for a dinner of “Carri”2. This is an honour, and in whatever way you consider it, some kind of an initiation.
Indeed not many people go there. They had never been invited, and rare are those who have been requested to come. On the way, they make out the gliding shadow of a frightened head of cattle that must have wandered away. One of them has left the mountains and this is going to irritate many people. Now a smell of saffron-scented food is wafting about, and it pervades the room. The cabins are passed on as legacies (as are many other things in these parts). Those of a feather gather there almost every evening, after all it is their island, as is La Réunion, their land, another island. They may be outcasts, still they defend their claims. They do not fancy French food very much, they just can’t take it, and they go to their cabins for a good fill of “carri” and “rougai”. They also make an incredible punch, which they sip as they talk. They chat freely, but on the other hand, they always feel how isolated they are, and nostalgia is never far away. This cabin is not that small, not much would be needed to have a view on the sea. There is a garden bordering the cabin, but a few plants grow painstakingly; it looks a vicar’s garden, a sub-Antarctic garden with an arid basalt-based soil. Here, they will have a good time. They grow all the vegetables that the climate allows; it is their shelter, even though, once in a while, they invite a large number of guests, as today. All three of them had helped them the other night and they had a nice time, so what’s one more plate, or two? This is why they had wanted to invite Guilhem, Roi z’oizo and Gracchus. Guilhem likes the chicken coop, he is gazing at the fowl and he at once recognizes the mischievous rooster that sometimes wakes him up right in the middle of a dream, no big deal after all …