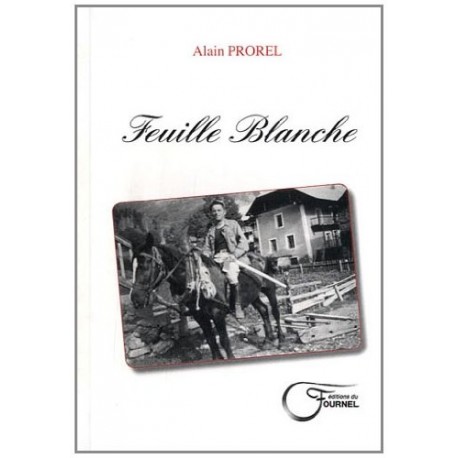 Feuille blanche - In this autobiographical novel, Alain Prorel tell his adolescence at the Gap high school.

Feuille Blanche is a faithful, realistic and humorous testimony of the post-war years in which technology and tourism transform the village considerably. It is also a story of a little boy who refuses to leave the quietude of his happy childhood passed to the rhythm of the seasons, between his parents, on the farm, who refuses to go into an unknown world: high school & internship, and who feels in spite of himself entering this mysterious and troubling period that is adolescence ...

This autobiographical novel was published for the first time in 1994. In 1998, Alain Prorel published his second novel "Sans Racines" at Éditions du Fournel.

Retired English teacher, Alain Prorel confesses a lack: his students. For some years now, he has been talking about his life, from his childhood to the village of Champcella until his retirement. His first autobiographical novel: "Feuilles blanches", tells his years of pupil at the lycée Dominique Villard in Gap. In 1968, he began his studies at the Faculty of Letters of Aix-en-Provence. He stayed abroad, in London (as assistant) and in N'Djamena in Chad (as a cooperant) before becoming a teacher at the Vauban college in Briançon.