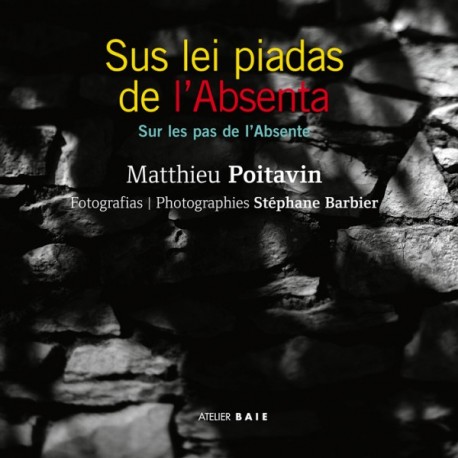 A man pushed by a wind of nostalgia walks in the footsteps of his adolescence. A random walk, everything reminds him of his childhood. The walker then begins a second quest: who is "Nîmes l'Occitane"? Why does the one who is also called the "Absent" bring it so deeply into the world? The narrator returns to the paths of his childhood. The photographer slips in his wake and delivers the images inspired by his wandering.

A beautiful book, that of Matthieu Poitavin, a book of words in short texts by Oc and Oïl, perhaps poems, written on the occasion of an unexpected railway stop at Nimes during a banal journey to Orange, Which is supposed to be an everyday city, whereas Nimes ... The anecdote, real or fictitious, opens on a return to the native land, the family country, the country of the mas of childhood, the country of the mother language, Occitan, married after adolescence.

There are the words of Matthieu Poitavin, there are also the black and white photographs of Stéphane Barbier; Photographs of small areas of clarity, light, within very black black. Light which, like the text, acts in fragments, signifying plots of a whole which is said modestly, yet totally.

This first person photographic journey, legored by bilingual texts, asks us about the quest for a hidden but omnipresent culture. That one would like to disappear but that haunts us. To open the eyes. Learn to feel for naming. Become an insatiable traveler, thirsty for languages ​​and knowledge.

The author:
Matthieu Poitavin is an Occitan author, professor of Provencal and Visual Arts. Open to the cultures of the world, he studied cinema, modern letters and then Occitan. He wrote lyrics for singer Liza l’Occitane whose song "Soleu Roge" won the audience award in 2006 during the Eurovision of Minority Languages. His fantastic novel, bilingual, in French and Occitan, Lo Matagòt Modèrn (IEO Lengadòc) mixes tradition and modernity.


The photograph:
Stéphane Barbier made his first pictures at the age of 17, inspired by the discovery of the current of post-war humanist photography. Photo-journalist since 1990, successively in the editorial offices of the newspapers Le Dauphiné Libéré, La Provence, and Midi Libre. He settled in Nimes in 1999 and collaborated with the national press, L'Express, La Croix, Libération, Le Monde.
In collaboration with journalist Adrien Boudet, he produces and publishes several reports in Africa, including Déforestation in the Cameroonian forest (Ushuaia Magazine) and Lac Tchad (Midi Libre). He participated in various books published by Atelier Baie, publisher. He produced posters and visuals for various theater companies: Compagnie du Petit Subito, Triptyk Theater, Théâtre de Nîmes, Blue Potential by Jeff Mills. Photographer of the festival "Les Suds" in Arles since 2007 with Brother Florent Gardin.