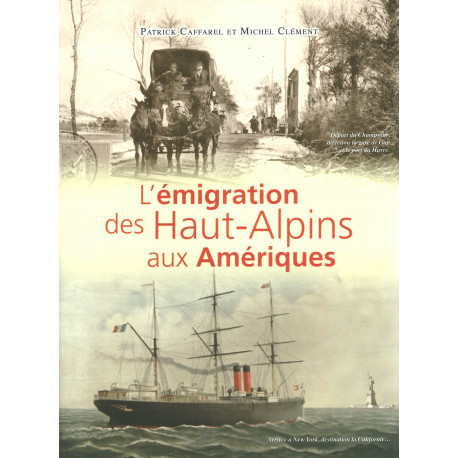 From the middle of the 19th century, 6,000 Haut-Alpins emigrated to the Americas! Through the numerous written and photographic testimonies, the authors give them back the floor and their dream of a better world takes shape.

This book is the fruit of the long and beautiful work of two passionate researchers: Patrick Caffarel and Michel Clément. Many are the Champsaurins, Gaudemarous, Dévoluards, Raboutins, Gapençais, Haut-Alpins, one or more of whose ancestors emigrated to the USA in the last centuries.


One day a car stopped in front of Patrick's grandfather's farm. She was heating up and her driver wanted to fill up with water. He was american. For the kid who was Patrick, it was a shock: while he believed that his grandfather spoke only the patois champsaurin, he saw him initiate a discussion in American with the unknown ...

Later, he learned that his grandfather was one of the 5,000 fellows who left the country to try their luck in America. This memory never left him and he tried to find out more. One day, when he researched the departmental archives, he met Michel Clement, who also worked on the same subject. After an incredible work of ants, they published this spring a book: "The emigration of the Hauts-Alpins to the Americas." They explain their approach.
Michel Clément: "The idea was to look for emigrants, we started with lists that we expanded and we found stories and very interesting stories, then we regrouped by family, it is a complement to the genealogy Which is a solid basis for our research. "

Patrick Caffarel: "I had documents about my family, and when I started to exploit them, I became passionate about the subject, I had a very rich family history and I did not know. Lived the "spring creeck raid", an attack between sheep and cowboys, which is a well-known historical event in the US Many books have been devoted to it.When one finds descendants, one must give them proofs to be credible I went to the US and American parents came, I was lucky enough to meet one of them who was also looking for his roots, I dug my family history, but without Michel Clement I would have Not have the idea of ​​leaving the family and expanding my research.With the book, we feel legitimate to talk about these subjects.The people we meet also give us a lot of documents.We have the same will To work on the real, the factual, it is not the series "tales and legends", our stories are not fiction.


Michel Clément: "I saw my father, who enjoyed reading in the Alps and Midi the series of articles" our cousins ​​of America "by Maurice Barrès.There was a favorable soil.In fact, one has to be curious and one discovers This movement has touched 6,000 people, including 5,000 fields, which is a good source of information, each had a different experience, they were sheep and for them it was a real passport Based on their abilities, and when they landed, they knew the craft and they were skillful and had an innate culture in this area. "Mary Herr, a friend of Jack London, wrote" The Flock " That "the best sonnaille comes from Gap." (This book was re-published thanks to the House of the Shepherd of Champoléon.) We crossed the information and found emigrants' letters requesting "to send Gap bells ".

Patrick Caffarel: "We also found reports from 1971 published in more than 25 American newspapers that told the story of the last shepherd on horseback surrounded by his three dogs.He was born in the Hautes-Alpes! They penetrated a universe in which everything was different: language, units of measure, immensity of territory, climate, predators, including cowboys, who were very dangerous beef cattle breeders.

Michel Clément: "The emigrants were present in 35 of the 50 States, they were able to move towards more stable trades, and sheep, which they kept on horseback over immense tracts, passed on to cattle, then to the dairy. When they founded a family, they stabilized and became part of US society, some even found oil in their gardens, and followed a rising trend. The arrival of the railway (in 1876 in Los Angeles) made it possible to cross the country in only 8 days.There are no statistics on those who returned The archives of the port of Dunkirk with the list of passengers were destroyed during the war 39-45, but the rate of return is low, the children of those who remained remained integrated and Become American. "