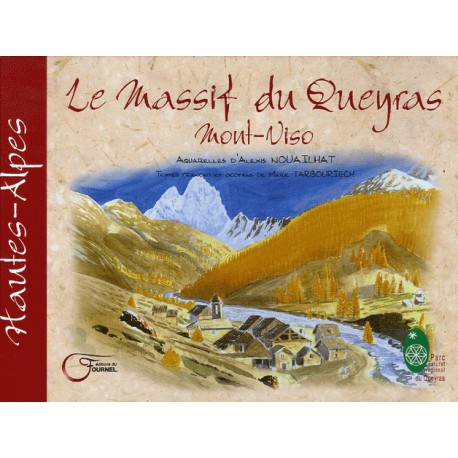 Le Massif du Queyras - Mont-Viso - There is no difference between a mountain walk and this book of watercolors by Alexis Nouailhat with French and Occitan texts by Marie Tarbouriech.

Le Massif du Queyras - Mont-Viso - Book of watercolors by Alexis Nouailhat with texts in French and Occitan by Marie Tarbouriech.

The attraction exercised by the Queyras can not be explained by the mere physical reality of its mountains. At the time of rationalization where one would like to know everything, study everything, understand everything, what would indeed be Mount Viso without its nebbia scarves that suggest more than they mask? What was the use of this vertical impulse if one saw it as an enormous chaos of rocks and ice? And what would be worth a hike through the alpine pastures if you only perceived herbs and rocks and did not think of the herds in summer or chamois yet invisible? There is no difference between a mountain walk and this beautiful book by Alexis Nouailhat and Marie Tarbouriech.

Although the technique of the artist deserves all the qualifiers, watercolors remain only windows on a universe where the imaginary is king, where understanding is not the essential. The texts in patois give to this work the cross-border dimension which is the very essence of this massif.

So take the time to dream by flipping through these pages, imagine what is only suggested, perceive the sun that burns, the lombard that blows, the race of a deer ...

Gaston Rebuffat affirmed "that there is a food which man has a vital need: the wonder". And that is the essence of this escape in Queyras. Nicolas Crunchant (back cover).

Alexis Nouailhat is a naturalist watercolorist. His watercolors are dedicated to landscapes, flora, fauna, mountains, lakes of altitudes, walls, cliffs, sunset on the peaks ... Scenes of natural life with a sense of humor, Watercolor humorous, you have to see the postcards of eagles, bearded vultures making loopings ...
A watercolor painter, who travels the world to meet other landscapes, other encounters ...

Find here all the watercolor books of Alexis Nouailhat.