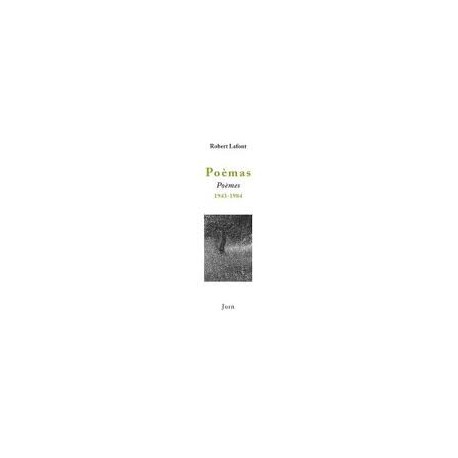 The first book of Robert Lafont is a collection of poems: Lyrics to the old silence. We are in 1946, he was 23 years old. It is through poetry that inaugurated a literary, scientific and political will have more than 110 pounds.
Robert Lafont is primarily a poet and poetry is that between writing. The momentum is taken. Throughout his life, he will publish poems in journals or anthologies, nine books with all of unequal length, since these words in silence until the old Great Journey of Odysseus of Ithaca, translation of the Odyssey, he published in 2004 and is a work of art in itself. Sixty years of poetry.
Poetry for him is not a hobby teaching scholar. This is the heart darkness and flying, "the center more central" research that merges with his life and that we can define as a search word. Personal word that dates back to the paradise of childhood, inherited from a grandfather guardian whose stature dominates all life and all the work. Collective voice in giving back to a defeated people missed his destiny, so that its "old silence" and again become a subject of history. Speak and to talk. Speech Personal joined the collective voice. The poet joined the teacher, activist and scholar linguist. The fate of the writer is confused with that of his people. An often quoted to the second collection (1957), entitled precisely say, summarizes the life and work: "The only power he said. '
"The only power he said. "The language is peculiar to man and it circulates like blood in his veins and vessels. The man is a speech, a linguistic creature hole porosity. He rebuilt in the microcosm of his mouth talking the entire universe, anamorphosis, that is to say by analogy and model. The linguist invented a theory to demonstrate that any speech act is an action on the world e his power over the world he has to speak. This is the word which can move mountains.
After the first book written at the end of the war, 11 elegiac poems, filled with nostalgia and glare to the landscape, this poetry is both meditation and action. She talks about the beauty of the world and human misery. Beauty and misery in the large collection say, the first part is entitled "Saying things love" and the second "Telling the century man."
She also tries to reconcile the angel and the beast coexist in us, the heart and the reason, sensuality and intelligence. A poem in the collection free Air (1974) invites us to "cœurprendre" and "understand" the world, consumed by the senses and the mind. The garden, which celebrates Written for a sun died and rose (1984), is a figure of the poem: a place where blind join the gushing of life and a desire for order, the project of a thought.
RL has always had a taste for form, speech measured by rhyme and meter. Written for a sun died and rose proposes a reflection on the relationship between the poem and the monument, poet and architect. Carved stone and poetic word illuminate each other: their common point is the shape imposed by the intelligence volatile substance, evanescent, abstract speech and density heavy, brutal crushing and stone . Form makes the light stone and dense speech, she drags both. The poem in its frozen form is the breath of life in declamation, in that the linguist Lafont called the operational time of the sentence, as the monument comes alive in the proportion of ever-changing light and shade distributed the course of the sun.
Large collections, and Dire Air Free, question and celebrate the histoie "two sizes of man sex and reason." Sensitive and brain, free or subject to the measure of the verse, the poetry of Robert Lafont is an attempt to understand the world through the heart and mind.