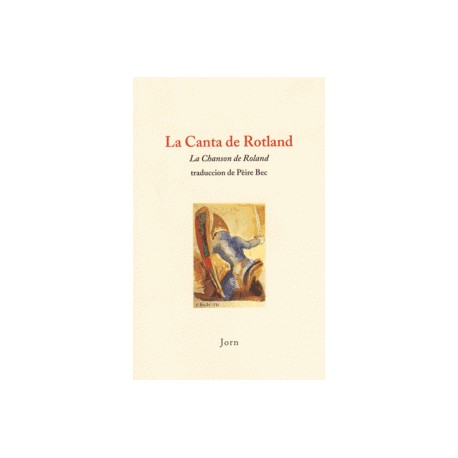 La Canta de Rotland - Translation in Occitan by Pierre Bec of the Chanson de Roland considered (a little fast?) as the epic of the French nation, but which conceals many mysteries.

La Chanson de Roland, considered (a little fast?) as the epic of the French nation, but which conceals many mysteries.


Transmitted to us by a single manuscript preserved at Oxford, it was doubtless composed at the end of the eleventh century on the road to Santiago de Compostela, then controlled by the order of Cluny under the tutelage of the dukes of Aquitaine, Allied to England. It transfigured Charlemagne's brilliant victory over the Saracens, an obscure and unpopular defeat of his army, the victim of an ambush set by Basque mountaineers. Some medievalists like Robert Lafont suppose that it derives from a lost Occitan original.

A great medievalist also, Pierre Bec, who is here the last work, restores the Chanson, if not in its original language, at least in its variant of proximity that is Gascon. He does so as a poet, preserving assonances and decasyllables, in order to render the power of the original, in a large and composite Gascon, a little archaic. The obviousness of this translation, its necessity, the choices of the translator are imposed with a logic of light. The savage grandeur of these warlike scenes preserves in Gascon all its power of fascination.
"Hauts son los pueis e lo sound esperlonga, / A trenta queens that the ausín has respóner ..."

It also reminds us, through its obtuse and quiet intolerance, of the massacres committed in the name of the one God, under the sign of the cross as well as of the crescent.

As a Germanist, a Romanist, a medievalist, Pierre Bec, president of the IEO from 1962 to 1980, is known for his tireless activity as a researcher and activist. Pierre Bec has staked the culture of oc from the Middle Ages to the Renaissance, to defend and illustrate it.

Born in Paris in 1921, he returned to Cazères sur Garonne, the birthplace of his father, where he discovered the Gascon language. He learned German and Italian in Austria and Germany, where he was deported during the war. Returning to France, he first taught German, before occupying in Poitiers the chair of comparative studies of the Romance languages. His fields of research are Occitan dialectology, Romanesque linguistics and medieval literature. Some of his works now make reference, such as La langue Occitane, which is often reissued, or his Anthologie des troubadours (10/18). He has published more than ten anthologies. In addition, the medievalist is accompanied by a musicologist specializing in organology (the study of musical instruments).

This continent of learning is duplicated by another territory, which it tends to obscure, of literary creation: 8 collections of poems, seven in Occitan, from Au briu de l'estona (1956) to the latter Liturgia pagana, an autobiographical narrative (Lo Hiu tibat / The Stretched Wire, 1978), a novel (Sebastian, 1980), collections of short stories (Tales of the Unic, 1977, Racontes d'ua mòrt tranquilla, 1993).