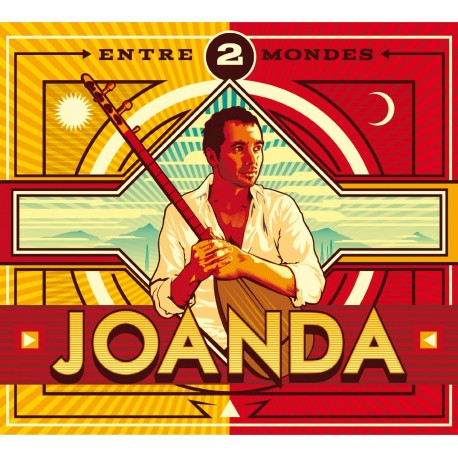 Entre 2 Mondes – Joanda (Audio CD) - An album of 14 tracks where the sounds of pop guitars combine with instruments from the Pays d'Oc and the Mediterranean basin. Like a trip to the heart of the South.

This artist is a true ray of sun: JOANDA is an occitan singer who reconciles modernity and occitan in his second album entitled "Entre 2 Mondes".


A title perfectly inspired since Joanda defines himself as culture and language Occitan but also culture and French language, caught between two worlds that complement and enrich themselves.
On this record, the artist has worked with talented internationally renowned arrangers such as Laurent Guéneau (Zazie, Sinsémilia, Souad Massi), Erick Benzi (Yannick Noah, Jean-Jacques Goldman) and Bruno Mylonas (Vanessa Paradis or Aldebert). These 14 tracks written and composed by JOANDA are accompanied by Occitan instruments such as the hurdy-gurdy and bagpipe of the Black Mountain (bodega in Occitan), but also instruments more classical with guitar, bass and drums. The sounds of pop guitars are combined with instruments from the Pays d'Oc and the Mediterranean basin. Like a trip to the heart of the South.


Joanda draws on the Occitan culture and traditions the originality of her compositions. His songs relate both to our civilization and to the world around us. The frankly pop song "Le pont qui danse" is inspired by a couple who danced on a bridge one summer evening during the festival Fèsta d'Oc (Occitan outdoor festival held every year in Béziers). In the dramatic "Enfant de Paratge", JOANDA says that the values ​​of the past have been abandoned in favor of more material values ​​(in the XIIth and XIIIth centuries in particular, the Occitan country was distinguished by strong humanistic values ​​such as Paratge 'nobility of heart').

It is the breath of a whole earth that addresses the World in 14 songs that merge the strings of the Mediterranean lute, the violin, the hurdy-gurdy and the bagpipes of the Montagne Noire; Each instrument embraces the warm rhythms of guitars and bass, set on the catchy percussions of the cajón and the snare drums. If some instruments have the eternal charm of a land without age, here they dance with the present, with all audiences, on gimmicks of which only Joanda has the secret.

Worn by a singular and universal word, the songs of this album breathe the Earth of a whole people and caress our ears always in search of new sounds. Whether in French or in langue d'oc, the singer-songwriter's voice knows how to be moved on "Do you remember us?" or festive on "Gosta la vida!". This title has been chosen as a hit of summer by the radio network of France Bleu du Sud Méditerranée and added in the programming "Nous on aime!" of the Radio Vinci Autoroutes network.

In the end, Joanda incarnates with passion the Occitan Attitude. His album mixes two universes, two lands that lull him in his daily life.