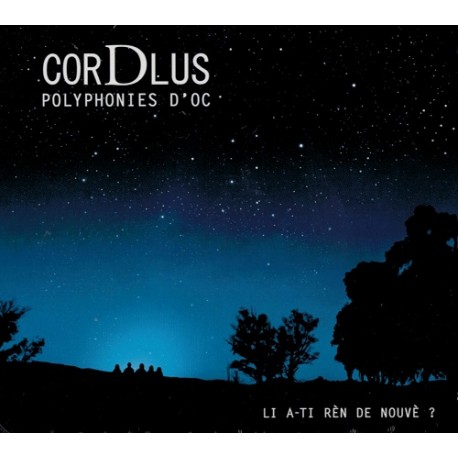 Cor D Lus is a polyphonic group of five men revisiting the classical Provencal a capella in Occitan language of Provence.


"Our songs are first and foremost the popular tunes of the Provençal tradition and more generally of all the countries of the oc We are working to give them new news Our creations are music of today on texts "We are heirs of the Mediterranean polyphony and singing."

Challenges: the work of the timbre of the voices and the harmonic richness to develop a palette of sound environments very diverse: secret, intimate, frankly brilliant.

Rhythmic games: to make resonate and to dance the language of oc.

Wishes: to make live and transmit in our songs the universal messages of texts, narratives, tales, myths and ancient rites. Testimony of humanity. Links between men and their regional roots. Sources of inspiration to better proclaim the present.

Cor D Lus, polyphony of Oc, proposes here its first album of Provençal Christmas and the country of language of oc. A repertory of Christmas borrowed in the last four centuries: Popular Christmas of Saboly, Christmas of the Félibres and creations. Through these songs, they lead us to reconsider the link between the songs of Christmas and our time.
Regards touched, shifted, sometimes ironic, and even squeaky, these humorous diversions mixed with the evocation of the traditions makes us perceive the fusion of the pagan and Christian rites of this festival.

Two high school students, Vincent and Sébastien Cladère, are looking for a Provencal class. They meet Didier Maurell, the teacher, who gives them the passion of the language of Oc. They are soon joined by Jean-Philippe Perdereau.

In 2010, the Town Hall of Ansouis (Vaucluse) ordered a Christmas concert with Philippe Franceschi, who is, among others, professor of choral singing at the conservatory of Manosque and Aix-Marseille University, composer, clarinettist of Aksak , And choirmaster on projects of the Festival of Aix.

The five musicians decided to set up a Christmas performance entirely sung in Provençal. The name "Cor de Lus" appears for the occasion. Six years later, Vincent Cladère, who became a saxophonist and choirmaster from the Marseilles Regional Conservatory, leads the group with the aspirations and vision of a demanding young man of 25 years.

CD digipack - Lyrics in the CD book and in PDF file.