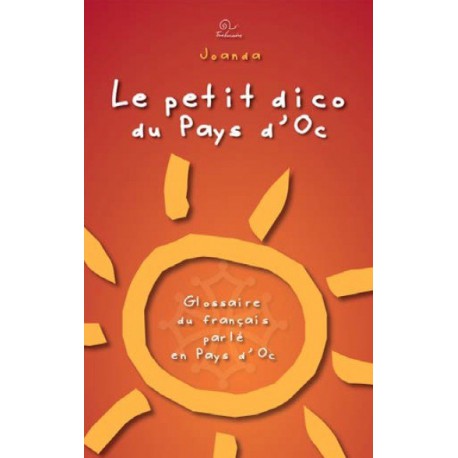 This little dictionary by Joanda contains a series of chronic radio by Joanda giving meaning tens of Occitan terms used in everyday speech.

It will interest both those who speak Occitan and those who wish to make its acquaintance: under its sunny cover you will find all sorts of expressions used in the "French of the Midi (South)" (in other words spoken in Occitania), explained and commented. It's often funny and everyone learns something!


Joanda, the voice and pen of these chronicles, gives us here the meaning of several dozen Occitan terms used in everyday speech. It is the voice of the South that blows us here that we do not say "throw" but hide, that we do not make a "kiss" but a poutou, that when it "sticks", it beats. We also find in the pages a few treasures about the origin of the bouillabaisse or pastis, but also what is called abrivado during a Camargue race or how we celebrate Christmas in Occitan country.

Without being exhaustive, it is a glossary commented and accompanied by examples that is addressed to those who already know and speak the Occitan language as to those who wish to better identify the nuggets of the daily speech in Occitania. Like a good music to put between all the ears!

Joanda, cultural actor of Occitan movement, is both a songwriter and performer, columnist for the radio and the press, and Professor of Occitan language. He also travels the country with his band oc to sing this earth that keeps watch and listen. All matches that the artist throughout his journey, there is that of the language of the people he has oc gathered in this book.