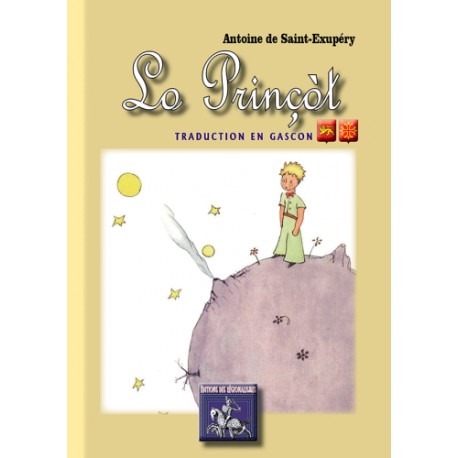 
First published in 1995, here is a new translation produced by Eric Chaplain, author, publisher and translator in Occitan for over thirty years.

Antoine de Saint-Exupéry was born in Lyon, June 29, 1900. He spent his summer vacation at the castle of Saint Maurice-de-Remens (Ain), which he will evoke in all his work. The baptism of the air that he receives at the end of July 1912 on the aerodrome of Ambérieu-en-Bugey will decide his vocation of pilot. He studied at St. Croix College in Le Mans, then in Switzerland, and finally in Paris where he failed the entrance exam for Naval and Central: he then decided to take the courses of the School of Fine Arts. In 1921, he did his military service in Strasbourg, in the air force.
He learns to fly, and from then on, his career is traced. When he left the army in 1923, he did different jobs. In 1926 he published his first story, whose action is in the world of aviation. The same year, Antoine de Saint-Exupéry enters as a pilot at Latécoère, an aviation company that transports mail from Toulouse to Dakar. Then he was appointed captain of Cap Juby, in southern Morocco, It is at this time that he wrote Courrier Sud (1929). In the company of Mermoz and Guillaumet, he leaves for Buenos Aires as director of Aeroposta Argentina.
On his return to Paris in 1931, he published "Vol de nuit" (Flight of Night - Femina Prize 1931), whose success is considerable. In liquidation, the company that employs it must close. Attached to Air Franc in 1935, Antoine de Saint-Exupéry tries to break the Paris-Saigon record: his plane crashes into the desert. In 1938, he tried to connect New York to Tierra del Fuego: wounded during his attempt, he spent a long time in New York.
He then published "Terre des hommes", Grand Prix of the French Academy's novel and National Book Award in the United States (1939). During the Second World War, he was a reconnaissance pilot with the group 2/33 (1939-1940), then settled in New York. He draws from his war experience "Pilote de guerre" (War Pilot - 1942) and publishes "Lettre à un otage" (Letter to a hostage), then "Le Petit Prince" (1943), his great success. He then wins North Africa and rejoins the group 2/33 despite numerous injuries and the ban on flying.
However, Saint-Exupéry insists on obtaining missions: on July 31, 1944, he flew from Borgo, Corsica for aerial photos over the Alps. His Lightning P38 is shot on the way back, around Marseille. He will never come back ...