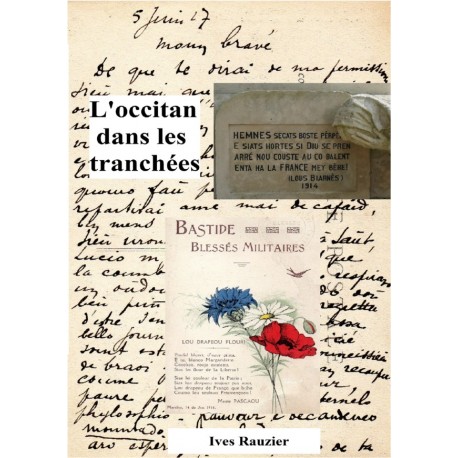 From historical documents, Yves Rauzier proposes to return to the place of the langue d'oc, l’occitan dans les tranchées (Occitan in the trenches) during the First World War.

Through excerpts of letters and postcards exchanged between the "poilus" and their families during the First World War, in the form of an almanac (one letter a day of the year), it will make us discover the place of the oc language in the trenches, in the combatants from the four corners of Occitania.

On the eve of the First World War, the daily language of many French families is a regional one: Basque, Breton, Corsican, Catalan, etc. From Bordeaux to Nice, from Pau to Limoges, from Narbonne to Clermont-Ferrand, many mobilized prostitutes speak the language of Occitan or Occitan in their family life but also in their workplace.

Is it possible to trace this linguistic reality in the experience of the soldiers of the First World War, originating in the regions of the French language? If so, in what forms and on what supports? In what proportions? For what uses? For which recipients?

In this book, Ives Rauzier tries to answer these questions by relying on documents as varied as correspondence, trench newspapers, photos, monuments to the dead, etc. It is a new edition, augmented, of the book of 2001 (now out of print).

It would be necessary to add the existence of trench papers entirely written in the language, such as the extraordinary Echo d'or Bosquetoun, illustrated, composed by félibres, or Lou boulet rouge, by which Tessier liotenent. These newspapers deserve to be studied closely, for they are very rich in content, and here again we will no doubt be able to see what was said through the Occitan and could not say otherwise.

Beyond the linguistic aspects, it is also an opportunity to revisit what has sometimes had to undergo the soldiers of the South, in particular as a result of the calumnies unfairly addressed to the poilus of the 15th Corps. The testimonies are sometimes hard and undermine a certain idea of ​​eternal and united France. Without giving them more importance than reality, tensions have indeed existed between North and South.

In his own way, this book takes part in the necessary commemoration of the centenary of the First World War. Let us never forget what all the soldiers, young and old, had to endure. One of them, on a postcard written in the Artois on 19 July 1915, described the situation well and used Occitan.

L'author:
Ives Rauzier, a teacher at the preparatory class in Bordeaux, is a native of the Cévennes by his father, and of Verdun by his mother. He has published other books on the First World War.