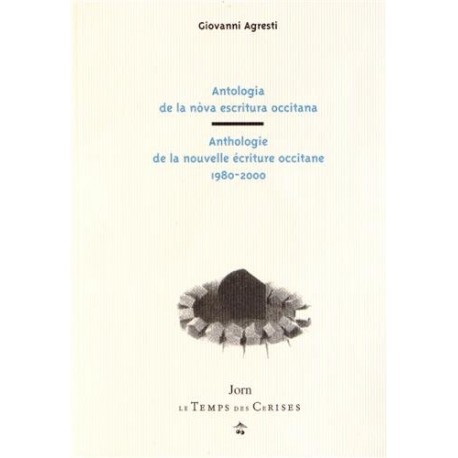 Anthologie de la nouvelle écriture occitane (1980-2000) Antologia de la nòva escritura occitana  - Bilingual anthology by Giovanni Agresti, panorama of Occitan literature as it was written by the generation that followed that of the founders of the Institute of Occitan Studies.

(Anthology of the new Occitan writing).

This bilingual Anthology of the nòva escritura occitana by Giovanni Agresti is exciting for several reasons.

It first fills a gap, since it offers a panorama of Occitan literature as it was written between 1980 and 2000 in the pen of the generation that followed that of the founders of the Institute of Occitan Studies like Max Rouquette or Robert Lafont. It offers texts by young authors such as Albin Bonnet and Sylvain Chabaud, as well as poems by Philippe Gardy or Jean-Luc Sauvaigo, which belong to the previous generation and are characterized by a continuity of continuous writing. It traverses both narrative and poetic genres and all linguistic variants, from the Gascon (Eric Gonzales) or the Limousin (Jean Ganhaire) to the niçard (Sauvaigo, Pelhon), via the Languedoc (Alem Surre-Garcia, ) And Provençal (Casanova, Miniussi), a total of 22 authors.

His determination to present only writers born after the war, without denying the importance of the previous generation, wishes to show the dynamism and the modernity of a writing which has not ceased to renew itself for almost a thousand years without A solution of continuity, open to the most recent influences like the example of the great ancients.

The eccentric point of view of its Italian author, free from hexagonal prejudices and free from any territorial roots, allows an unprecedented perspective of Occitan literature.

Finally, its bilingual character, the French translation being given with comments in French, makes it accessible to any reader.

Giovanni Agresti is a researcher, lecturer at the University of Pescara (Abruzzo). Speaking perfectly French, he was interested very early in French literature, even in its most unknown aspects, such as literature in so-called regional languages, which led him to learn Occitan, speak and Written fluently. He is the author of a remarkable study, il segno del desiderio, introzzione alla letteratura occitana contemporanea [the sign of desire, introduction to contemporary Occitan literature]. He has directed a special issue of the Italian magazine Berenice devoted to Occitan literature in recent years.

This attentive reader of the Occitan letters is not ignorant of their actuality. He has written numerous articles, given lectures and facilitated round tables in this field. He participated in the Colloquium of Castries on 13 and 14 October 2000, organized by Jorn and the Regional Center for Letters, where he interviewed Max Rouquette. He is also a contributor to the OC magazine.