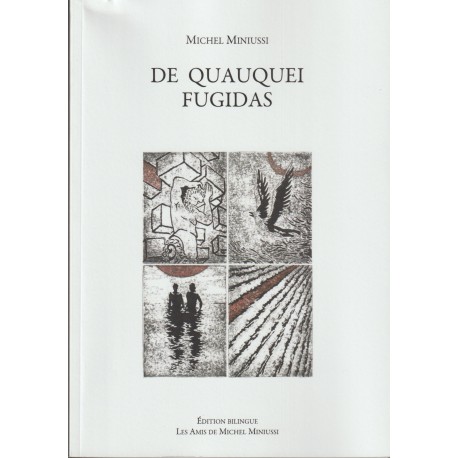 Faced with these uncertain times in many respects, socially of course, anthropologically even and for us Occitanists, desperate because of our solitude, it is a great pleasure to evoke "Quauquei fugidas". We will therefore ignore the progressive and now irreversible questioning it seems of the teaching of Occitan in the curriculum of public education, giving thanks to what was the emergence of a new talent of the oc literature: it arose from eastern Provence, more than 40 years ago under the aegis of literary Occitanism, among the most ambitious with a certain Robert Lafont as mentor.

Faced with these uncertain times in many respects, socially of course, anthropologically even and for us Occitanists, desperate because of our solitude, it is a great pleasure to evoke "Quauquei fugidas". We will therefore ignore the progressive and now irreversible questioning it seems of the teaching of Occitan in the curriculum of public education, giving thanks to what was the emergence of a new talent of the oc literature: it arose from eastern Provence, more than 40 years ago under the aegis of literary Occitanism, among the most ambitious with a certain Robert Lafont as mentor.

Michel Miniussi was not quite twenty years old around 1974 when, studying in khâgne of Nice, he set foot in the stirrup of oc literature as a young prodigy already endowed with a singular erudition, sometimes perhaps to be arrogant and of an undeniable literary talent which will quickly assert itself. From his initial texts, let us remember these few leaks "Quauquei fugidas" in three parts, an exercise in which he rubbed shoulders with literary creativity, a quest for style too ... by this language still so despised today. Thus his initiation as a young literator was made. In these "a few leaks", the main lines are already sharpening which will later allow the realization of his novel "Lei passatemps" where the quintessence of his work, a work of maturation, will be staged.

This is of course a time when the attraction for culture had not yet completely waned, especially that of oc, when the now fashionable series had not yet taken precedence over the Pasolini, Fellini or Bergman cinema, where poetry was not abandoned by its potential readers.

Discovering the texts in Provençal of this young writer today surprises because of their ambition, a certain desire to go towards virtuosity and also in reflection of the vibration of an era ... and gives balm to the heart because - beyond his knowledge of lexicon and oc literature already completed under the guidance of his mentor Robert Lafont and his disciples, this is the birth of an elegant prose in the footsteps of the great prosecutors of Provencal expression and more broadly Occitan. Furthermore, as it is moving to discover the vagueness, the hesitations of desire, knowing since then the course of fate, what was the response of the oracle.

There are two quotes on the cover page, one from the poet Petrarch, a great admirer of Arnaud Daniel, the troubadour of Ribérac and the other from Philippe Gardy, author and contemporary literary critic.

"This figure of the universe which encloses itself, which is built on its own laws of operation in a flight and at the same time a rejection of the universe of historical men, may appear as the major sign of the ideology of literature in Occitan country "says that of Philippe Gardy.

It is moving to see the beginnings of a literary vocation appear but why the choice of this minority language on the part of this young adult so little politicized? Michel Miniussi reveals his temperament as a writer, almost seemingly considering literature as a way of salvation as a discreet pilgrim as if to cultivate his distance from the world, his secret garden.

"For three months already, they have been fleeing", begins this youthful text evoking from the first page the church of Vallauris, North African figures and the market, all taken in a dreamlike atmosphere. The language is clear, a well structured Provencal, mastered but sometimes letting catch in its nets a few words from a neighboring dialect, the Languedocien like "espiar" (rather than agachar) or "somiar" (rather than pantaiar) or even the old-fashioned "antau" in Provençal and not Ansin, popular in the Provençal spoken at the time, all this in a very Lafontienne tradition. It is a question of drifting in reverie, a rambling where the word in this tearing language is anchored in a place, "I have searched enough not to find. I was drowned in a set of mirrors. "He said.

Michel Miniussi pursues his road movie not far away, Mouans-Sartoux, Grasse, this Provence so little usually present in Occitan prose.

"Say, everything is there. The rest is lost outside. I create in my head. I give shape to running images. I catch them when they are ghosts just born in the labyrinths of my brain. "

The literary game continues, willingly baroque, dyed in poetic prose, imbued with small winks of erudition with always this delight to make language work through the discovery of a micro-space resulting from an in-depth knowledge. Sometimes it will be necessary to look under the fold of the diaphanous veil. In "Quauquei fugidas", Michel Miniussi invites us at one point to a sort of truancy where where like mischievous kids we would leave the endless gravity of reality.

"The country did not die, it forgot its own life, abandoned itself. The morning mists erased the forms. The dew drops, suspended in the leaves and branches, were the colors of a more powerful being and ultimately not only dreamed, fantasized. "

There is also sometimes as the echo of ancient moments of pleasure until immodesty, the language allows it: "A few hours have passed and the sun has dropped enough so that the shadow drowns everything, that the cold freezes make the drenched skin feel like new. They dressed again, withdrew the leaves from the hair which made them look like ancient agrarian deities. "

Everything is belly in this post-adolescent prose where scholarly culture and popular culture intersect: around the chapter "the rat", suddenly arises one of these riddles that the peasants loved to throw in the cantonade, during the vigil or at times rest: "What is it?" What is it that is plowed but where the plow has never passed? "

To conclude even if we are aware that often he uses the langue d'oc as a screen, it is very moving to realize that in the manner of Frédéric Mistral from the writing of Mireille, he delivers here its first emotions in a phraseology in search of lyricism, but a little stammering :

" The sun which had lowered pushed it forward and the red of the sky mixed sensually as well with that of the lips which a young woman offered him, by the doors, in her arms. Let him surrender to his will which now took the helm, on his soft sand-colored bed. The dance of their bodies continued, with the scattering of his clothes like a cloud of crows in his room, muting their voices from hug to hug and mixed breaths drying up in the depths, refusing the incongruity of their meet. "

It is therefore disturbing and encouraging to read this text by a young man from the 70s who fervently sets off in the wake of the greatest oc pros, a voice mowed too early which was already beginning to find its way in its quest for maturity and its course already well defined, a path which will be completed with "Lei passa temps".