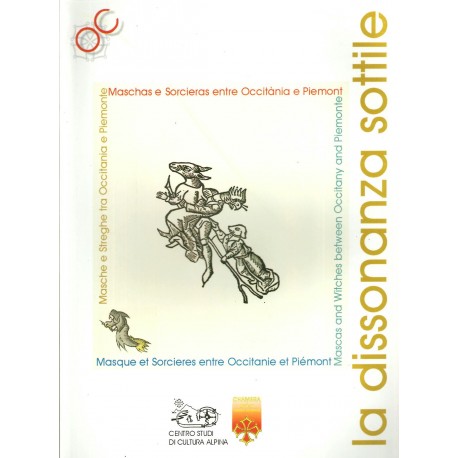 Text of book in Occitan, italian, french and english, in Piemonte (Italy).

SÈEEEEEEEEEEEEET: A YELL FROM THE PAST
Traditionally, the number seven has been the number of fear. Fear for the unknown, for a different world from ours, but not completely extraneous, at least in the popular magic tradition. People who change their appearance, wandering souls, living-deads, imaginary beings and animals have a foothold in both worlds and, as the person who has received the gift, can go through the door dividing the world of the living from that of the dead.
This catalogue publication is part of a project by the "Centro di Cultura Alpina (Val Po)" and Chambra d'oc called MAGIC VILLAGE, magic land, inserted in the regional project OCCITAN LENGA OLIMPICA. Mascas/witches between Occitany and Piemonte: the subtle dissonance -this is the evocative tide of this publication which wishes to contribute to a scientific study on this subject, on a local scale. It is not easy to reach our goal. Indeed, recently many people had approached the subject of popular magic in a poor way. Stories of mascas arc sources of clues, but sometimes they transmitted to us beliefs which are no longer followed and narrated by people for the sheer pleasure of telling them. The "magic", in this disillusioned time is mere narration, hut only the most skeptical researchers could nowadays think that behind these words there was no core of original beliefs (if it makes sense to talk about "origins".
The V'estern Alps area, which is between Occitany and Piemonte, is very rich with stories. Some show a real ancient core, while others came to us through eighteenth- and nineteenth-century hooks, and are nowadays not genuine because they had been modified by those who gathered them. Some others suffered the strong influence of the Christian faith and of its specific vision of the afterlife and magic, related with evil and with the idea of hell, intended as a place of perdition and eternal pain.
By publishing this catalogue, organizing an exhibition and a conference, we wish to start a movement which will involve, for the next few years, different projects to enhance Barge and the Monte Bracco. The present catalogue has been partially made using a study which will soon he complete.
In the name of the Council of Barge I wish to acknowledge the two societies Centro Studi Cultura Alpina and Chambra d'Oc and the historian Giorgio Di Francesco for this work.
1 am sure that thanks to the insertion of this project into the regional one OCCITAN LENGA OLIMPICA, the Occitan valleys will create an international event with a strong link with our land's traditions.
The mayor: Mario Picco