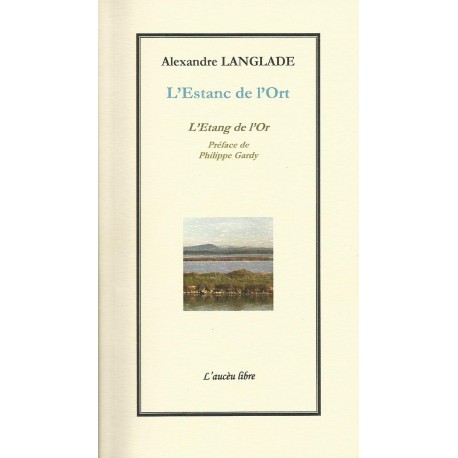 
The text of the poem of Langlade is that of the posthumous edition of 1906. The French version and the notes, of which it is not known for certain by whom they were established in 1906, have been reviewed by us.


Extract from the preface by Philippe Gardy:

Alexandre Langlade was born in 1820 in Lansargues (Hérault) in a family where the father, besides the possession of an agricultural property, practiced the profession of cooper before taking the head of a company of distillation. At the age of seventeen, in conflict with his father, he decided to leave his native village and set up shop in Lyon, where he worked for a few months as a pharmacy preparer (his brother Cadet, Germain, was himself a pharmacist, a little later, in the same town). Cultivating the idea of ​​going beyond the oceans in America, he went to Marseilles for this purpose. But this dream did not come true: it was in fact for Algeria, after having spent time in the great Provençal port the job of cooper, learned alongside his father, that he embarked in 1838 as Engaged military, for a period of seven years.
This Algerian period, where he served notably under the orders of Changarnier, lasted only two years. Undoubtedly sickened by all the exactions he then witnessed, he abandoned Africa at the end of 1812 and joined the barracks of Montpellier. This return to a few tens of kilometers from Lansargues gave him the opportunity to reconnect with his family. But these reunions were only short-lived: forced to subscribe to the commitment to which he had committed himself, he was forced to leave Montpellier ...