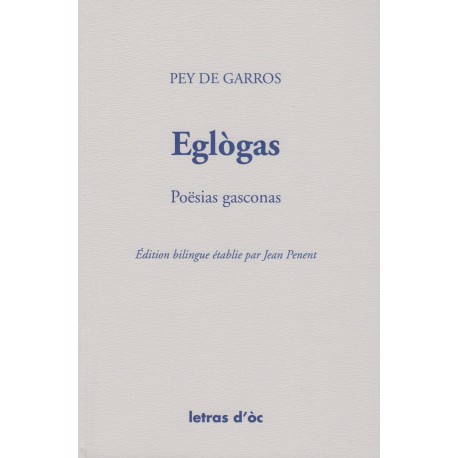 Pey de Garros, born in a well-to-do family in Lectoure, in Lomagne, around 1525, pursued a legal career in Gascony and Bearn until his death in 1583.
But he is best known as the one who, by the publication of two books, the Psalms of David viratz in Gascon rhythm published in 1565, and the Poesias Gasconas published in 1567 in Toulouse, deeply renewed the literature of Oc in the sixteenth century.
He is the first who, in a totally innovative way, assumes in the literary expression the dialectal peculiarities of the Gascon in the whole Occitan. As Robert Lafont writes with great insight, Garros marks, in the Occitan becoming, the birth of the Gascon writes. In his work, he uses a personal spelling that is at odds with the ancient traditions of writing the archives, and he wants to make his language enter modernity in the same way as other European languages.

His Eglògas constitute one of the most original elements of his poetic production, putting in the mouths of his characters the concrete language of the peasants of Gascony of his time, serving a literary expression of quality.

Jean Penent, a connoisseur of the language of Pey de Garros, explains many passages of the Eglògas that have remained obscure until now. It proposes to the reader original hypotheses, referring to the political and religious situation of the Oc countries.