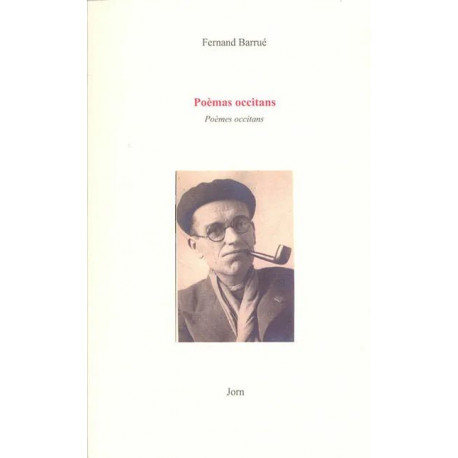 Poèmas occitans - Poèmes occitans - Fernand Barrué (Occitan poems). Book bringing together the three collections of the Gascon poet, which offers poems denouncing the Occupation (war) and the misery of the times or placing themselves under the sign of water. Jorn Editions.

Fernand Barrué was a discreet occitan poet, little published during his lifetime and forgotten after his death.

To repair an unfair oversight, we are publishing his three Occitan poetic collections.

The first, Morceaux de vie quotidienne (Pieces of Daily Life), is written in the Languedoc of the Castres region. Composed during the war, it includes “topical” poems denouncing the Occupation, the black market, the misery of the times. It also includes poems of memories evoking the village of childhood, the seasons and the games, the works and the days

It is in his second collection, Poussiéreuses arantèles d'un lumignon éteint (Dusty aranteles of an unlit candle), that Barrué reaches poetic maturity by paradoxically turning to his childhood Gascon. Freed from the rules of versification, this series of poems is written under the sign of water: dead water from canals and ponds, living water from the Save. The thread of water is woven with the thread of time and takes us into the final abyss as with Apollinaire. Regrets of dead loves, darkness and melancholy, loneliness and dust of a life on the decline are expressed in a fluid musicality: "And the dust covers the old memory dead / in the cold ashes of the poor heart. "

Because Barrué was also a musician who played several instruments, as evidenced by the seven short poems of the last collection, Musique.

Fernand Barrué was a discreet poet, little published during his lifetime and forgotten after his death. Born in Lévignac in 1891, died in Rieumes in 1956, two Gascon towns in the Sava basin (31), he was professor of mathematics in Castelsarrasin then in Castres, before retiring to his native region.