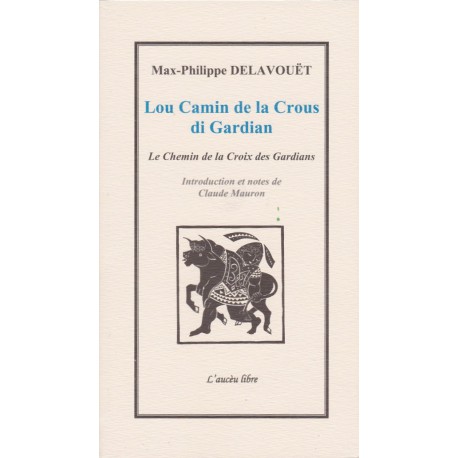 Lou Camin de la Crous di Gardian - Max-Philippe Delavouët (The path of the cross of the guardians of Saint George). A sonnet in memory of Folco de Baroncelli, an extract from a study on Joseph d'Arbaud, a youth poem with "arbaudian" consonances. L'aucèu libre.

A sonnet in memory of Folco de Baroncelli, an extract from a study on Joseph d'Arbaud, a youth poem with "arbaudian" consonances.

Introduction and notes by Claude Mauron:

That Max-Philippe Delavouët occupies a prominent place in Provencal literature, has long been a matter of simple evidence.
Born in 1920 Marseille, it is in the farmhouse of Bayle-Vert, in Grans - where he practiced, until his death in 1990, his profession of farmer, of the Four Cantico for the Age of (1950) to the five books of Pouemo (published from 1971 to 1991), a major poetic work, whose originality and scope were recognized, in particular, by Jules Supervielle and Lawrence Durrell.
There are plays, as well as many other texts - poems, prefaces, interviews, articles ... It is this last collection that belong four of the five writings here gathered: Lou Camin de la Crous di Gardian, A sonnet in memory of Folco de Baroncelli, an excerpt from a study on Joseph d'Arbaud, a youth poem with "arbaudian" consonances. Minor texts, of course, but that it is worthwhile to group in this factitious compendium (as scholars say) and to make less confidential, first for their writing, then because they testify of the The interest demonstrated by Delavouët with regard to the Camargue and its emblematic Provençal writers, provided that the authenticity of the country was respected. The same was true of bullfighting, when Delavouët, president of the bullfighting club of his village and aficionado de corrida, celebrated in his Cantico dou Boumian that fuguè torero ("Song of the Gypsy who was a bullfighter").
Conversely, as soon as it was confronted with the denaturation of the Camargue in our contemporary time, as a result of tourism (and its corollary, the development of an artificial image often cultivated, alas! By the local people themselves ), Delavouet did not hesitate to make severe judgments, as may be seen from certain passages. Hence, no doubt, the tendency of his poems of scope, when approaching the Camargue, to remain on the margin, that it is the Istòri dou Rèi death that anavo to the desciso ("History of the Dead King who was descending the river" - in Pouèmo 2), the end of which leads from Arles to the mouth of the Rhone, or the Cansoun of May Car Tourne ("Song of the Tallest Tower" In Pouèmo I) which has for Aigues-Mortes and the vineyards of the western edge. A third illustration, evoking a navigation along the shore of the Saintes-Maries-de-la-Mer, is the third side of the delta, is procured by some strophes of the Ouresoun de l'Orne de Vèire. ("Prayer of the Man of Glass"), which have been reproduced here, in fine: in a pictorial form, indeed, they could well express the spirit that presided over the writing of these texts, Thrown incidentally upon the beauties of the Camargue, by abstaining from landing there so as not to risk being engulfed by its sands.