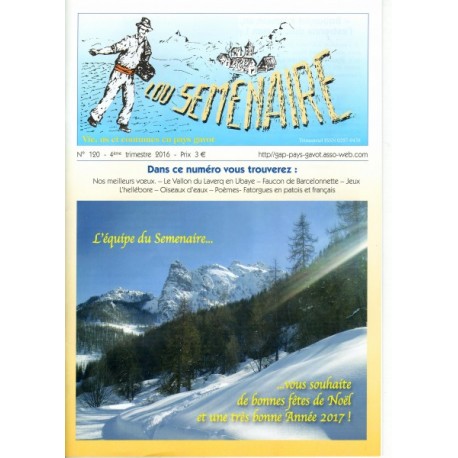 Subscription of one year (4 issues) to the quarterly newspaper "Lou Semenaire", published in french and gavot, by folklore group Le Pays Gavot.

It was in 1985 that the group of the Pays Gavot founded a bilingual quarterly, "Lou Semenaire". This color magazine offers fatorgues and other humorous stories of everyday life in Occitan-Alpine translated into French, articles on traditional trades and local history, old postcards, information on the appointments of Pays Gavot ...

The folklore and regionalist group of Pays Gavot and the city of Gap was founded in February 1972 by Haut-Alpins who were anxious to preserve the arts and folk traditions of northern Provence. Today it has different sections: traditional dances, young age folklore, singing, alpine occitan lessons, occulan-alpine theater, bilingual magazine Lou Semenaire. Since 1987, it organizes an international festival of folklore, in mid-July. It offers various theater performances in the Provençal language, songs and dances (spring show, pastoral during the Christmas holidays), and maintains the tradition.

Its name comes from Occitan Alpine Gavouot, a term under which all the Provençals of the mountain can be recognized, from the high valleys of the former County of Nice to Briançonnais, passing through the Occitan valleys of Italian Piedmont. "N'es pas Gavouot qui voou" ("is not Gavot who wants"), proclaims the motto of the group, which takes up an ancestral formula that appears on a sundial of the valley of Ubaye dated 1609. It is also said that the Bas-Provençaux said of the Gavots that they had "nothing but coat."

Even if the newspaper is on sale in our bookstore in Gap, it exists thanks to your subscriptions. It is shipped to you as soon as it is published so do not hesitate to subscribe!


Choose your subscription type above (normal or support).

It is also possible to pay directly by french check payable to Pays Gavot and send it to Mme Maryse TRON - 11 chemin du Clot - 05000 ROMETTE (France).