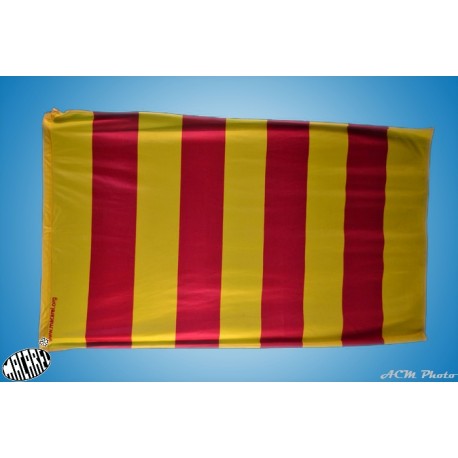 The flag of Provence is the traditional banner of the county of Provence with the four pals (vertical bands) Gules on gold ground. It originated in the coat of arms of the Counts of Barcelona and was adopted by their descendants, including the Counts of Provence, the Counts of Foix (three pals only) and the kings of the Crown of Aragon in the twelfth century and Majorca kings in the thirteenth century.

It is true that Provence and Catalonia have a long common history since it is the same family that governed them for more than a century in the Middle Ages and that the fraternal ties bringing the Provençals closer to the Catalans never really happened Extinguished. The real difference between the two flags is the sense of the pals. Indeed, on the Senyera (name of the Catalan flag), the red stripes are horizontal because they were lying against the shaft according to the medieval use. To make a distinction, the Provençal flag retains the sense of the coat of arms which is, in reality, common to Catalonia and Provence. The birth of the "sang et or" (blood and gold) or « d’Or à quatre pals de Gueules »  is still disputed between Barcelonais and Provençaux.

A French Emperor, probably Charlemagne or Charles the Bald (his grandson) would have entered after a battle in the tent of one of his most valiant knights, wounded during the fight: Wilfried the Velu, count of Barcelona. The Emperor discovering his dying vassal and seeing a gold shield placed at his bedside would have plunged his hand into the wound of the Velu and would have traced four lines of blood on the shield declaring: "Motto obtained by blood must be written By the blood! The House of Barcelona having ruled over Provence from 1112 to 1245 would have imported its coat of arms in the South of France and the Provençals would have retained them thereafter.

Although unofficial, this emblem is still found on many public buildings and in many cultural manifestations in the Provençal space since its symbolic takeover by the Félibréen movement, echoing the resumption of the Senyera by the Catalan Renaixença. The Provence-Alpes-Côte d'Azur region has also honored it with its logo and flag, in conjunction with the eagle symbolizing the county of Nice and the dauphin symbolizing the Dauphiné.

Note that the Occitan flag is also used to symbolize the belonging of Provence to Occitania. We also find the cross in the heraldry of some Provençal towns located in the old marquis of Provence or the Comtat Venaissin (Venasque, Gigondas, Methamis, Saint-Didier).