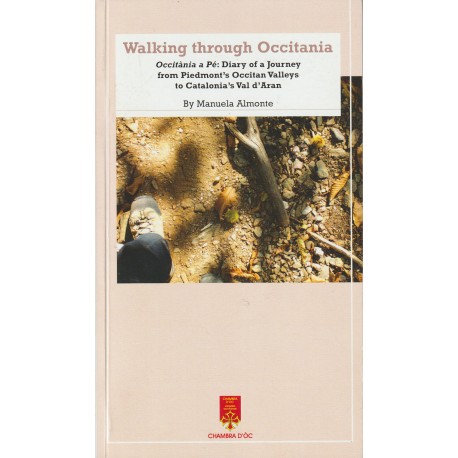 Occitània a Pè : Diary of a Journey from Piedmont's Occitan Valleys to Catalonia's Val d'Aran

"This crazy train of rigorous dreamers who, for sixty-nine days, has followed its schedule, which would not have stopped for practically anything in the world, will complete its final stage tomorrow and then equally inevitably it will stop. Each of its characters will step down to earth with his or her own baggage, and the small world inside it, with its carpets of leaves, its sumptuously set tables,and all its small everyday objects, cloths and tin cups, will dissolve and all that will remain will be a story to be told, trying to do it justice ... "

Leaving Vinadio on 30th August, 2008, and arriving in Vielha on 7th November, seven wlakers crossed the entire territory of the Occitan language, from Italy's Occitan valleys to the Aran Valley in Catalonia, carrying with them an appeal to include the Occitan language in the UNESCO list of world heritage.

Manuela Almonte was born in Bra, in the Piedmontese province of Cuneo, in 1974. A freelance journalist, musician, and cultural event organizer, she contributed in the Occitània a Pè project, writing the introductory guide to the walk and then walking the wholer route. Here she gives us her "travel diary".

Extract: July 2008
« Now I can't wait to leave. It's been ten years since my last and only long walk, a one-month hike through the Himalayas. It gave me a reserve of energy that I carried with me for the whole following year and which helped me to make some important choices.
That was a journey through glaciers and high passes, which brought me to the limits of my strenght and taught me the calm in proceeding one step after another, even in the most difficult situations. And after I got back, when so many people asked me how I could have wanted to walk for so long, I realized that the problem for me and my fellow adventurers was the opposite. The problem was how to stop walking.
This time it will be a different journey. Back then it was encounter with nature, solitude, the emptiness of wide valleys. This time we will have a safe port every night, a village, people waiting for us and others accompanying us. Exactly what I desire strongly at this time of my life.
What doesn't change is the pattern of the walk. A world in itsetf, in wich one gets up every morning and starts to walk; in the evening one stops to sleep in a new place and the next day the walk continues. It is curative, like everything that is simple, like everything that has a rhythm and a direction. Walking helps us to experience reality better : here and now we risk everything, in every step that can't be erased redone, in every encounter that can't be repeated, because we will be in continuous movement... »