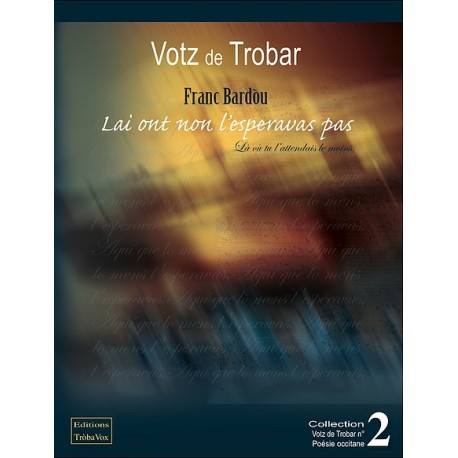 Franck Bardou, born in Toulouse in 1965, teacher and poet, written in Occitan since 1989, collaborates in the magazine Oc. Since 2011, he has been the editor of the magazine Gai Saber. Author of a doctoral thesis on the work and thought of René Nelli, he is a member of the Academy of Floral Games of Toulouse and the Acadèmia Occitana.

Author of collections of poems such as Filh del Cèrç, prize Paul Forment 1996, Cant del Cèrç, La crida, Atlas londanh, The tree of mèl, and a literary manifesto recorded by the writers of their generation in the Movement descobertisa . His poetic practice, of form and troubadouric inspiration, is articulated around the rhythm, in a hallucinatory or visionary perspective that opens the imagination of the texts to all possibilities. In prose, he also published two collections of short stories, D'ara enlà and Qualques balas dins la pèl, and a novel of Jungian inspiration, La nuèit folzejada translated and published in Catalan in 2004.