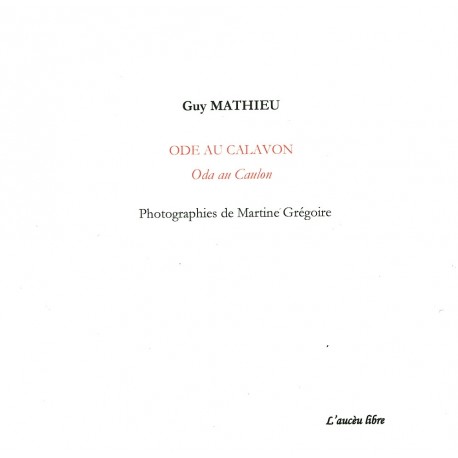 Beautifully accompanied by the photographs of Martine Grégoire, this poem for the river will enchant all those who like the poetry of the water which, descending from the mountains, runs in the valleys. The poet speaks with his river and suddenly makes us share in the intimacy of his conversation.


Each copy is unique: numbered, signed by the author and the photographer.

The Calavon is a river that has its source in the Alpes de Haute-Provence (formerly Basses-Alpes), crosses the Vaucluse, and comes to throw (after changing name) in the Durance, near Cavaillon. After an eventful race in the gorges of Oppedette, he takes his ease in the valley that has modulated over the ages at ubac Luberon. It's there that. the Romans created the Domitian way which runs along and sometimes crosses the river, in particular to the Julian bridge which they built on a rocky base, at a place where precisely its bed is tightened. It is from here that the place name Calavon is transformed, and becomes Caulon (Coulon in French). The isoglossal line is not clearly defined and some locate it symbolically a few kilometers further downstream, at Baumettes, on the historical border of Provence and Comtat Venaissin. It is clear that seven or eight kilometers below the Julien bridge the two forms Calavon / Caulon (Coulon) coexist.